IYO, am I overfeeding?

So my girl is 128g. Ive been feeding her a rat fuzzy every 5days. Hubbs (who has no interest in snakes and ofc thinks he knows everything) thinks Im feeding her too often. Your thoughts?

You could probably go to once a week imo. That’s a pretty good sized meal for her. Your pups around 20G each?

Sorry, edited, feeding her a rat fuzzy every 5days, rodentpro has them marked as 13-20g

What kind of animal is this?

How old is your ball python?

To be honest. I have one little male of the same weight. I bought him last december. He is from july 2019 and to me he looks a little skinny. I can see his spine more than I like and his weight is by far less than the girls I have of his age. He feeds on rat pups around 10 gram. I decide to go and feed him every 5 days for maybe two three weeks to give him some extra body. I have two girls from june and july who are both around 225 gram and I only feed them once a week a small mouse around 18 gram ( they didn’t change to rats yet). Both of them I bought early September.

I feed babies in general once a week unless I think they look skinny. To me they are skinny when their body has a triangular shape from the spine down. They should be nice round but not so round you can not see the spine at all. If I worry about there shape, or I have some feeders left which got too small , I feed once every five days but only till have a healthy shape or the small rats/mice are finished. Mostly only like two to three weeks and then go back to once a week. In general considering the weight of your snake and the prey I think once every seven days is enough, unless he really looks skinny. It is better for a snake to have a few days to really digest before he/she get new food again. With this rate they grow very well. My oldest who is only a little over two years was few days ago already 1800 gram and the others grow in the same rate. No need to rush their growth more.

Good luck with your snake !!

Not sure tbh. Just have her weight

i mean on one hand if she’s not hungry she won’t eat, but I would think a fuzzy every week would be your best bet.

I feed once a week, if they’re still hungry I’ll give them 2 rats instead of 1.

Fuzzy rats are more fatty (less healthy) than similarly-sized mice and the majority of captive snakes are overfed. I feed baby BPs roughly every 7 days (though skipped weeks for travel or shedding probably make it more like every 10). Body composition with good, firm musculature is generally the best gauge of health. This is a great graphic showing ‘healthy’ look (unfortunately only of an adult specimen): 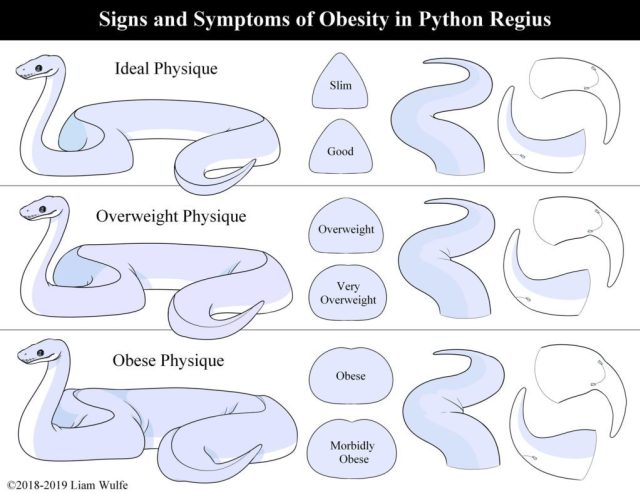 Unless you have the really greedy ones

. All the snakes I got as as baby just love their food. They are ready to come flying out of their enclosure as soon as they smell a rodent. Once , twice or three times a week., shed or no shed, they don’t care. They are always ready. The only ones who act more difficult are the one I got at an older age…

Here is a pic of her taken after posting. I think she looks pretty healthy. She never refuses a meal. And I’m not trying to power feed her or anything. 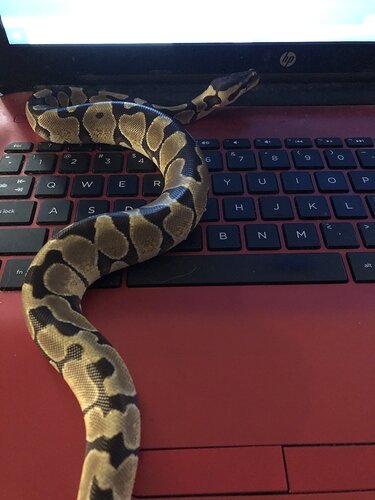 Ah, she is not overweight. In fact, from that picture I would say she should be bumped up to a larger feeder (from 1-1.25 X as wide as the widest part of her body). She looks more tall than she is wide–she’d easily take a hopper.

If she weighs 125 grams smalls are gonna be way too big. But I think a pup size (20-30G) should be just fine if you want to bump her up

@thecrawdfather I had to double check the size of the keys on my keyboard after you wrote that (I don’t use a scale much–I’m more of a boa guy) and I agree about small rats likely being to large. I edited my comment accordingly.

Idk of all rat guys use the same size lingo either that could get confusing.

Keep feeding her every 5 days. I changed mine to every 7 days once they hit 260+ grams.

Really once a week would be okay. My boy got fed about once a week while he was growing with mice about 1-1.5 times the size of his thickest part and he kept a good body condition and grew into a big healthy boy. Keep an eye on body condition and weight to make sure she’s gaining weight at a steady rate but not becoming obese. You’ll be okay!

I’m in similar situation myself. My first snake i got back in september when he was over 3 month old and healthy round 135g. Fast forward to 2 weeks ago when i picked up this female supposedly from same season (hatched sometime in early summer of 2019) and she was still under 140g despite being over half a year old. Her spine was showing a LOT and her shape was also triangular with somewhat flat belly. When i first held her at breeder’s she was lethargic to the point that she refused to move and just held stiff in my hand, literally not moving at all except for head. I risked it and took her home, then fed her mice pinkies to fuzzies every 3 days (got 10 pups from breeding female so they are naturally increasing in size with time) and so far she didn’t refuse a single one, even when she entered blue. She’s starting to fill up and she is also way more active than she was at breeder’s. Once she reaches 160g or so i’m planing on slowing down to young mice (under 25g) once a week but untill then i’m going to offer as much as she takes.

Happy to hear she loves her food so much and is really getting more lively now. She is lucky that
you are ready to give her a chance.

Mine is quite slim but not really skinny, but he is small for his age. He is lively though so I don’t really have worries on that part and he loves his food. The only funny thing is that he really doesn’t like mice. He only wants rats, but to me that is no problem.

The funny thing is that I bought snakes in different ages but most very young ones. The one I got as babies almost all grow in the same speed, but the three ones I bought at an older age where all very small for their age. The last one was 18 months and only 450 gram. They claimed she was 600 gram. The one I got as babies are almost double at that age. She doesn’t look skinny like spine sticking out ect. but almost has the shape of a cornsnake, long and slender. She was still on live mice though. I’m happy she really likes her f/t mice now and hope to switch her to rats soon. The other two are on a normal weight now so I have hope she will too. But I always get confused why they still look healthy but at the same time still are so slender and light weight for their age.

When I see the graphic I would consider the one mentioned as " good" still as slim for a ball python and will try to feed a little extra. I like to go for a shape between good and overweight even more to the overweight side. Is the thirth one really overweight?