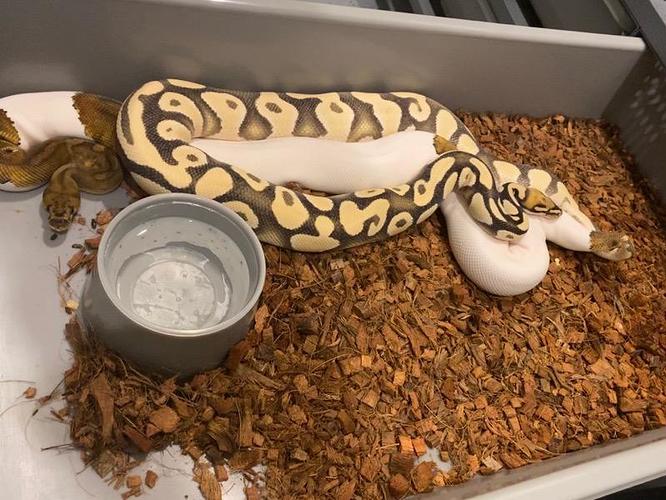 Man this is tough!!! Have quite a few I’m stoked about. But I’m going to go with pastel pinstripe Huffman x black pewter ghost. I’m probably picking this pairing because they are both holdbacks I hatched. 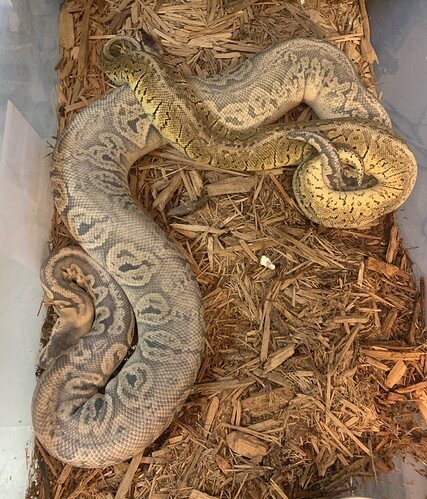 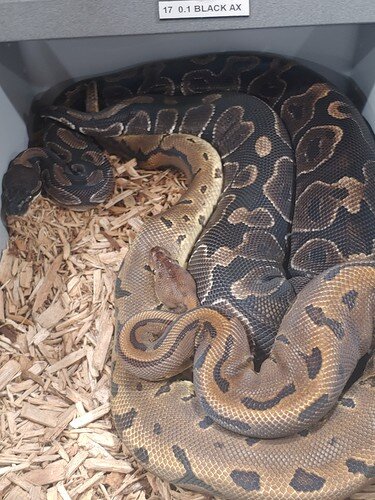 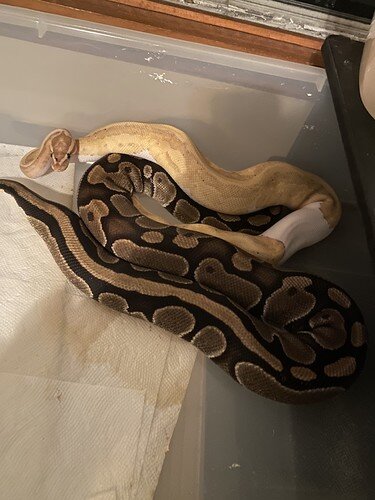 Sherbet has been courting Penny several times, but can’t seem to figure out which end is the correct end. 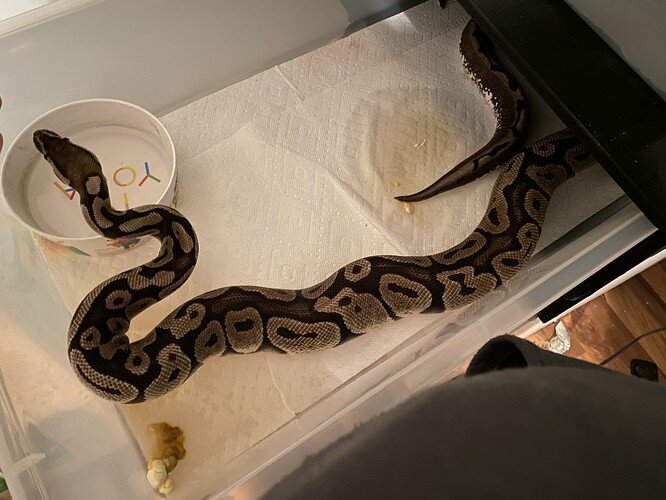 1.0 spider VPI axanthic x 0.1 pastel het VPI axanthic
I’ve also paired this female with my 1.0 pastel vanilla het VPI axanthic… but neither male has visually locked with her, and both males are virgins. I’ve tried about every trick in the book to get them to lock, and had no luck.
Either they’re getting it done quickly, or they’re just too shy.

Either way, I decided to throw in my Banan boy and at least try last seasons’ pairing again. For those who don’t know, out of 8 eggs only 1 baby survived, and I don’t really know what exactly went wrong besides possibly an early incubation issue. 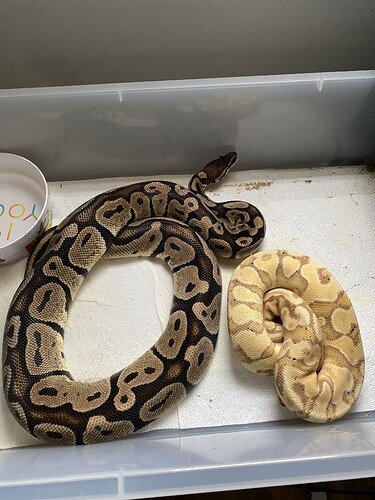 So now we got 1.0 banana yellowbelly with my pastel het axanthic girl. Hopefully he locks up with her, and knowing him he’ll stay locked for 1-2 days so I’ll catch it lol 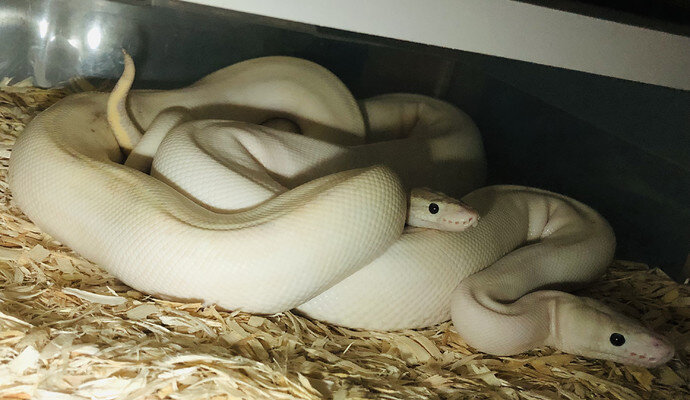 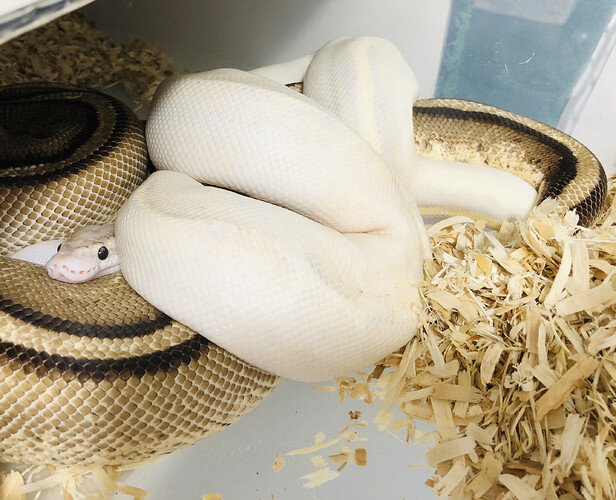 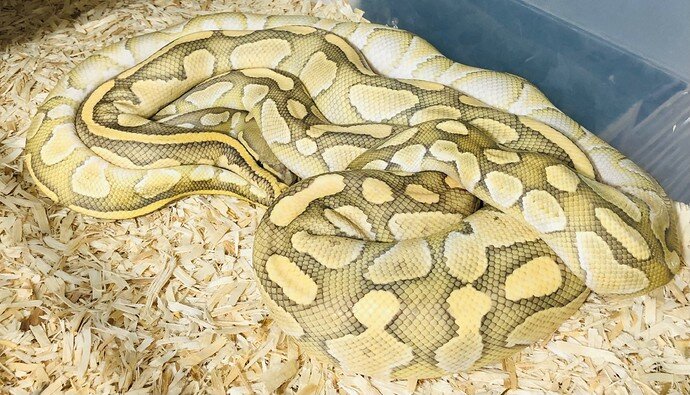 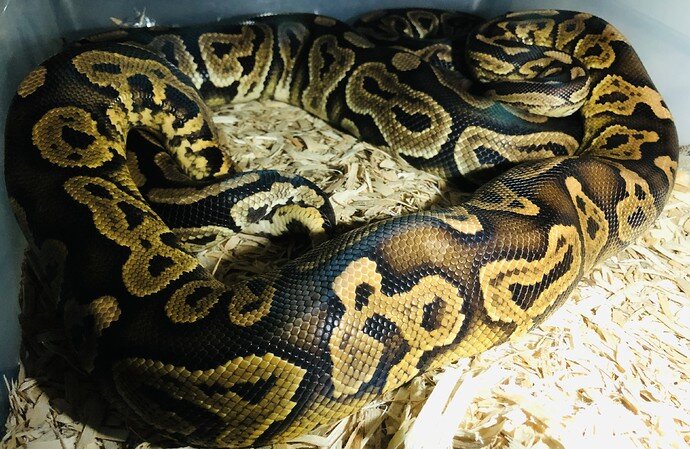 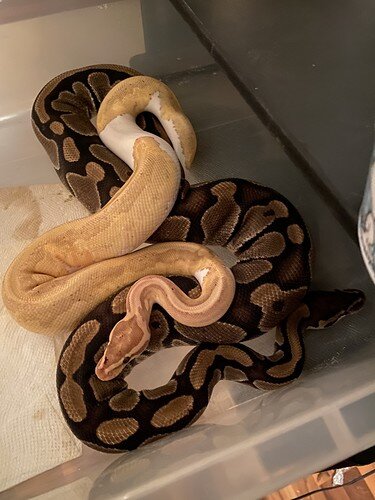 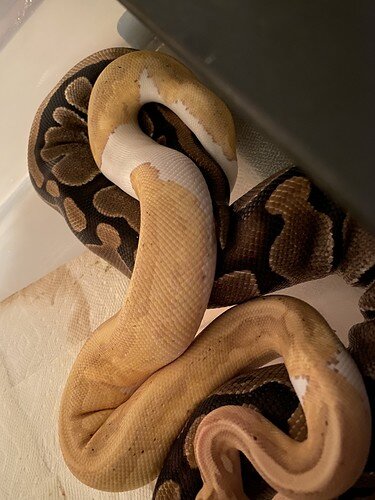 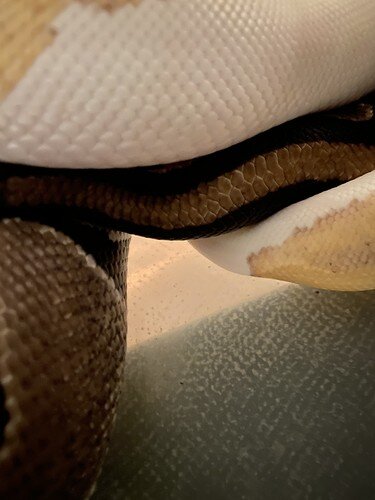 Sherbet finally figured it out! He’s a smol boy at only 500 grams, but he’s still eating so I think he’ll do great. Hopefully I can prove out the het pied for Penny as well if she goes for me! 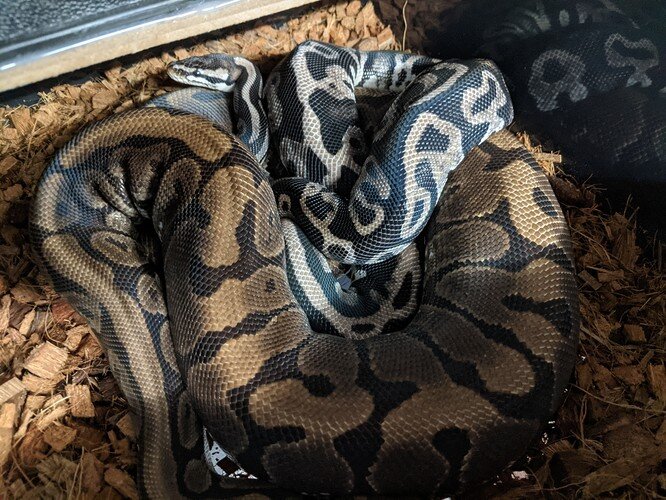 My only pairing this year and my first! Pastel Axanthic leopard x HGW. Hoping to eventually get some Axanthic Soul Suckers cause that could be cool… If he can figure it out that is… We are both learning how this works

So far I got 1 confirmed lock, 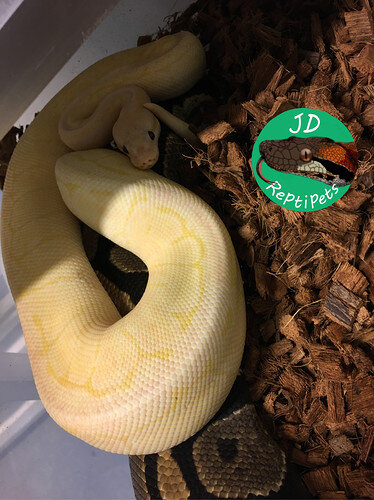 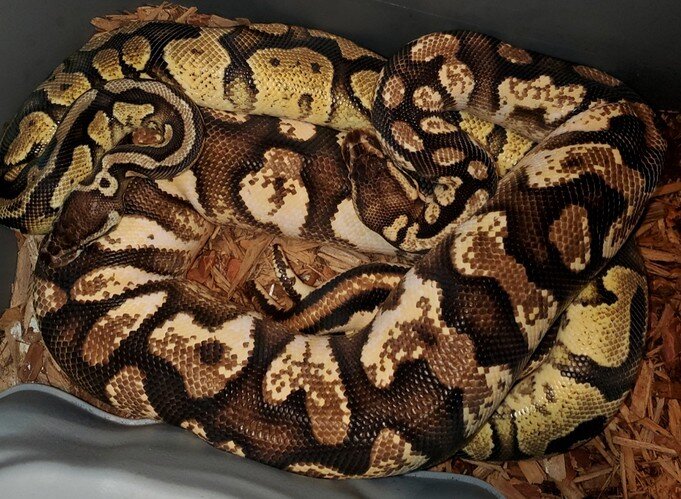 Special thanks to JT from ( ON THE BALL PYTHONS ) for hooking me up with a beautiful pastel calico female!

First and only pairing for now, borderline on of this counts as a lock or not, but either way not bad for their first time together!! 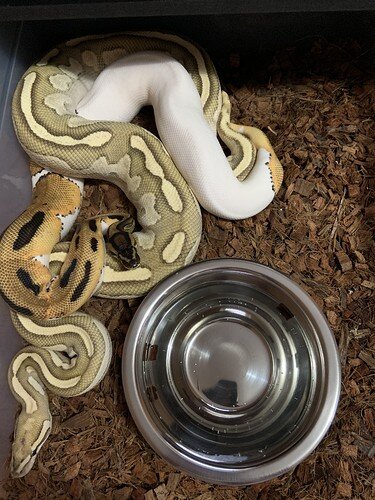 @solsticeroyals Really like the hgw pairing. I have made a lot of hgw combos! They are some of my favorites. I don’t believe I’ve ever seen a leopard hgw!!! Really curious to see how that turns out!

Me too!!! I still havent seen any locks. How long should I keep pairing before giving up till next season? She’s showing signs of building… but I dunno

How long have you been attempting? Depending on when you started it’s still pretty early in the “season” I personally breed year round and try to let the females when there ready. Males will breed any time!!!

October. They are together for the third time now. I was planning on at least 2 more dates before maybe. I don’t have enough experience to know if I’m wearing the poor dude out pairing once a month. He’s sitting just under 800g and has been eating like a champ.

It takes a lot to wear a male out! If he’s 800 grams and still eating I wouldn’t worry about that. If you don’t get a lock after your next two attempts, I would probably give them a month off continue feeding your female or resume feeding her if you stopped, then try again.

My 2 favorite snakes in my entire collection. Cappuccino a Mojave het. Pied and Posidian a pied. 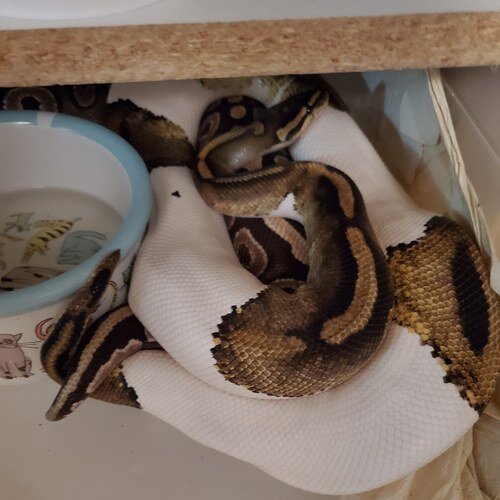 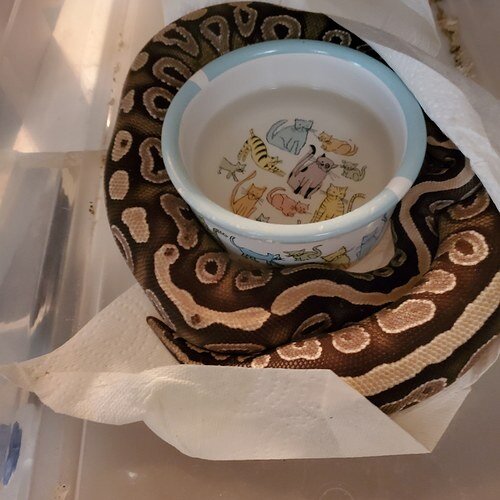 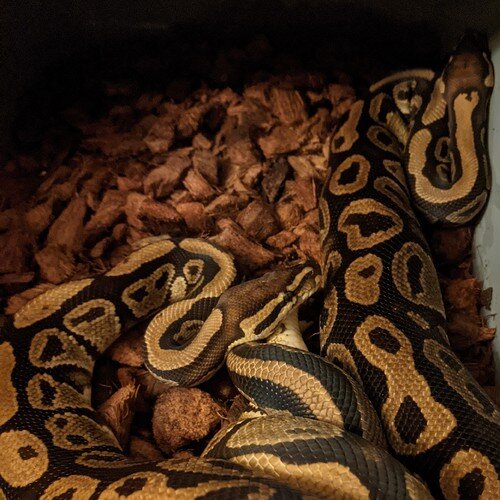 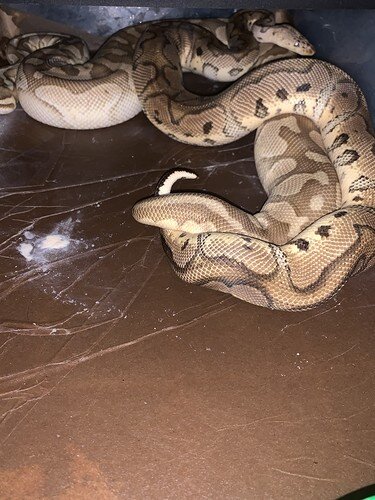 Wow I want to see those hatchling

A few possibilities, all very exciting for us. Albinos, black pastels, 8 balls, and any combination thereof with scaleless in the mix.

Pictures are outdated except for the front tub lock view. We have another identical female (sisters) and she has locked but isn’t at the 1500 gram mark so it’s less promising. 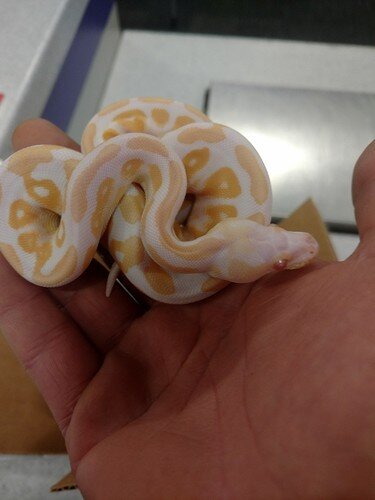 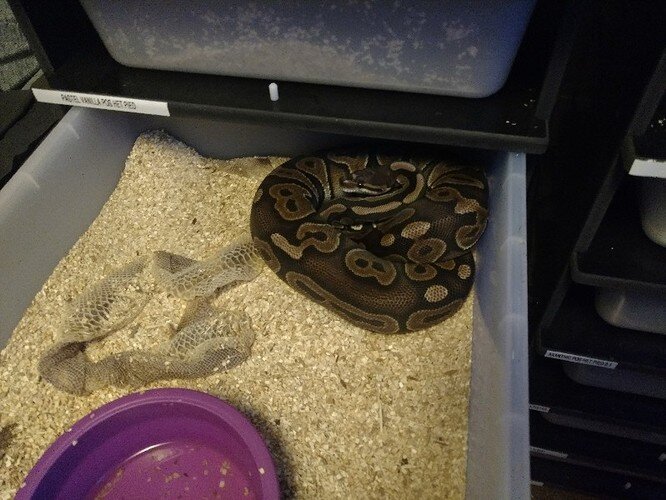 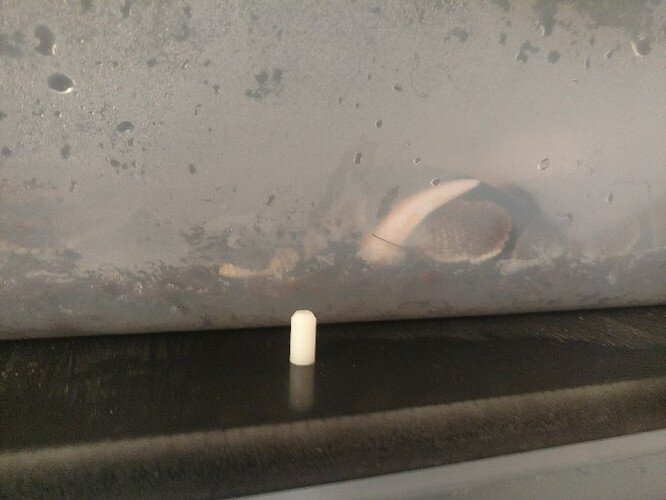