Just yesterday I bought a rack system that came with 6 snakes. The rack looks to be in good shape, just over a year old. The snakes, not so much… There are 5 California kingsnakes and 1 Western Hognose. When I got to the place where the seller lived, I found out all the snakes were kept in the rack in the garage. It was 38 degrees out there and the only thing the building offered was shelter from the wind. The snakes were cold and sluggish, most were on top of where the heat tape was. He told me the Hognose was female and double het snow, the male kingsnake was albino, a large female king was het albino, and he never said what the smaller adult was. There were also 2 young kingsnakes, both albino supposed female from the above pair. He said he was selling since he didn’t have time for them and had lost 7 of his previous 13 snakes the winter before. I didn’t look at them much in the garage as it was cold and dark. When I got them home and could see better I noticed that they were all dehydrated and malnourished. On the scale of 1-9 the hognose, 2 young kings, and the proven female are all around 3.5-4. Not bad but also could be better. The young adult is probably a 3, and the proven male I would guess a 1.5-2. He is pitiful. As I was looking at him in his box he started coming out so I put my finger under his chin to direct him back like all the others, he opens his mouth and slowly (because he’s cold) tries to catch my finger. I hope to feed them this afternoon, one mouse each. How should I go about getting weight back on the male? More often feeding? Bigger meals? I’m not too concerned about the others as they are in pretty fixable condition, but he looks to be on deaths doorstep. He is decently active now that he’s at room temperature, he also (along with the others) guzzled a lot of water. All 6 together nearly drank a quart of water. 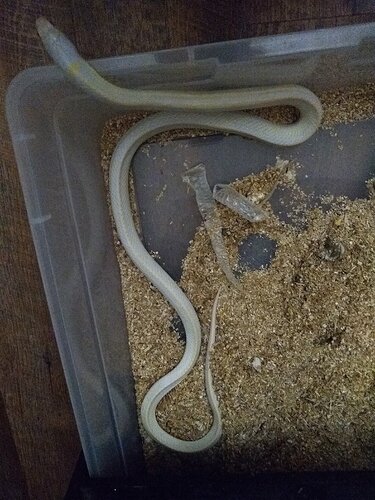 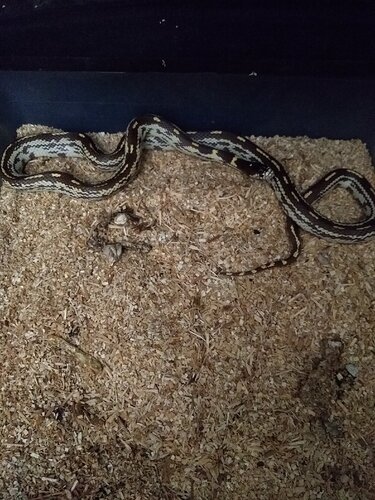 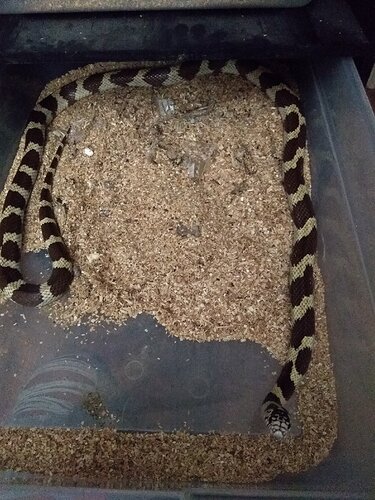 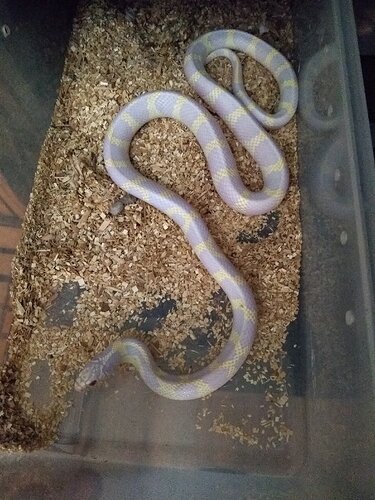 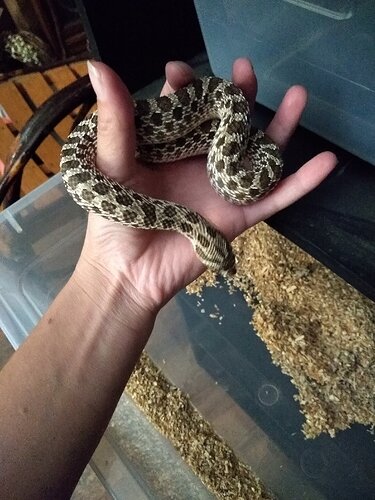 No snake is pictured twice, all are alert and active.

Omg you are a saint saving these guys from an obvious crap situation. Most of them look weight wise pretty solid. But then kings aren’t known for being picky. I don’t have much advice to give but plenty of well wishes! Good luck with all of them!

I originally just wanted the racks, but seeing them I may try to keep them. If not at least put weight on them before I sell them.

I would not recommend pushing them too hard to eat more than the usual amount of food. Overfeeding animals that are already weak is asking for a regurge, which could be very bad for an already weak animal. Let them gain weight at a steady pace from a normal feeding schedule. Try one moderate sized prey item every seven days and closely monitor for regurges. It is never good for an animal’s system to gain weight too fast.

I was going to aim for one adult mouse per 7 days unless something drastic changes. All the adults had a mouse tonight. The albino male looks so much better this afternoon, he drank a lot of water this morning and quite a bit throughout the day. He looks like months went by! 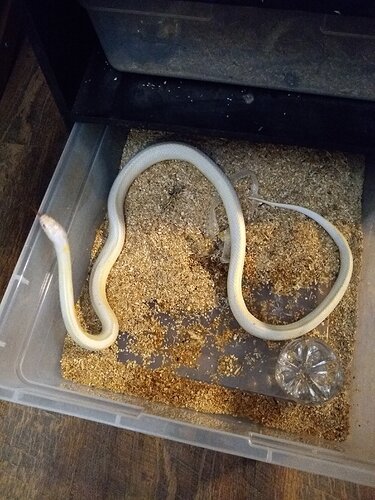 They seem to be doing much better these last few days! They have all perked up, started moving, and all ate. I have turned the heating on now that they are used to room temp. Is 88 too hot for the day? Also, I’ll add pics of what they weighed. Anyone know healthy weight for 1-2 year old male and female? 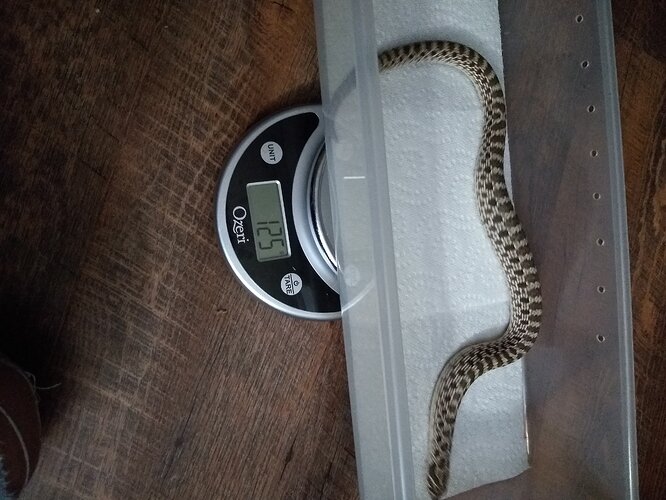 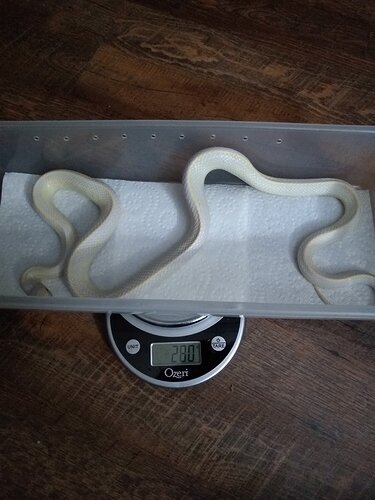 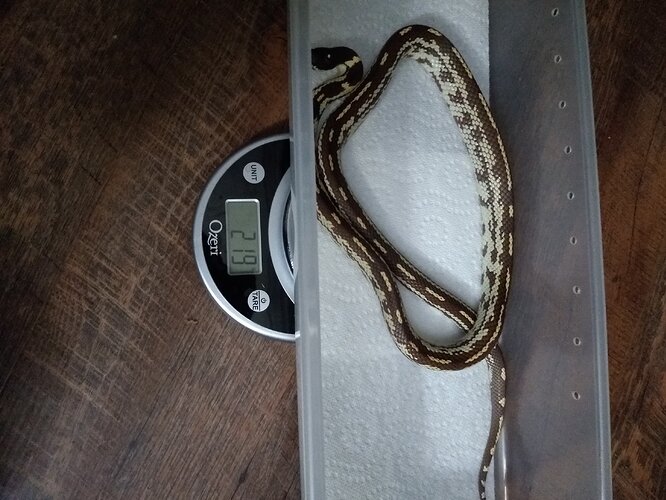 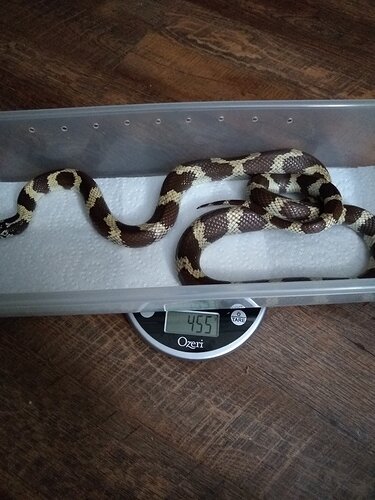 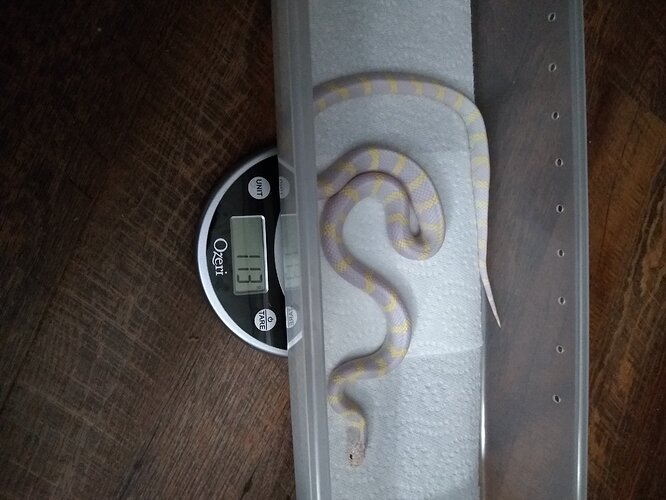 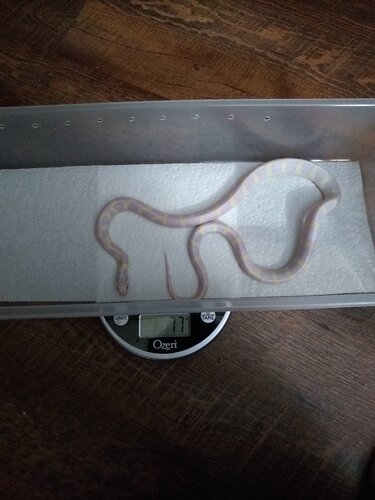 I have tried to get pics of their tails to see if anyone could sex them. All I know is what the previous owner said and I would like other opinions. I tried to look at them myself but I can’t see much of a difference 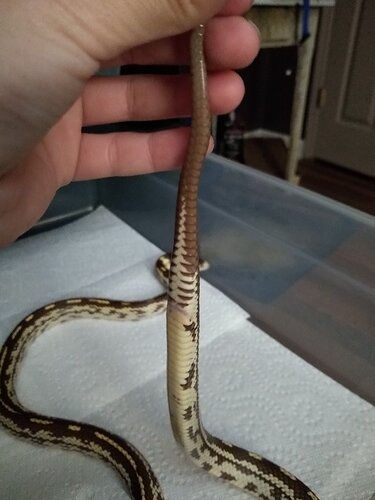 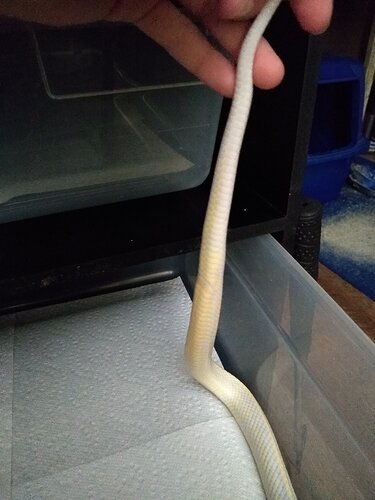 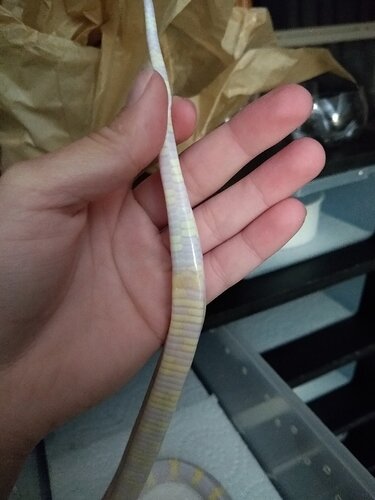 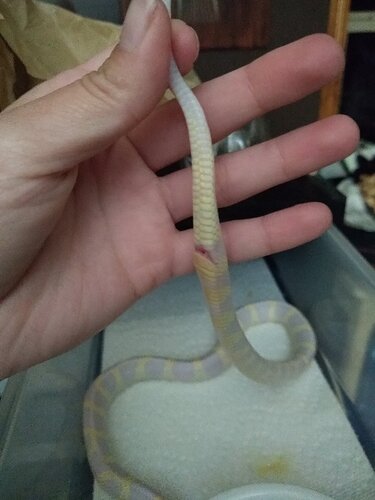 I’d love figure out who is what, especially trying to sell the babies.

You would have to pop/probe them to get a 100% on their gender. Can’t always just go by the way the tail looks.

I’d have to agree it’s difficult to tell just by the tail unfortunately. Are you planning on selling/rehoming all of them or just the babies? The Hognose definitely looks like a normal morph and with the size I’d agree on it being female though only breeding will tell if she’s het for anything.

I plan on selling the babies and possibly keeping the adult trio for breeding. I’m also not against selling them if I’m offered the right prices. I would definitely like to keep the Hognose as a pet if nothing else. Speaking of her, I found where she regurgitated last night. I fed them 2 nights ago and she happily ate, what would cause her to do that? I haven’t handled her, or even opened her tub. She pooped a few days ago so once everyone else did I figured they’d be happy to eat again

I’m not the most experienced but hognoses generally like a meal about the same width as themselves from my experience so maybe you gave her something too big?

That may have been it, it was just a little bit bigger around than her but I figured since it was the smallest adult mouse she would be ok. Oh well, I’ll put her down to hoppers for a while

Now that she regurgitated it could take up to a month for her to want to eat again, it usually takes at least 2 weeks though.

I always fed my hognose smaller meals more often. Was always told they generally ate smaller prey items than what you’d think they should be able to handle.

The man I got her from said she was eating adult mice. I’m trusting his information less and less the more time I spend with these animals. She will definitely drop down to hoppers for sure. I’ll offer her one a week after she did it. She’s still active and curious so I feel like she will eat.

Just don’t feed to soon like others have said wait a couple weeks at least before offering. She didn’t look skinny enough to suffer to not be fed right away. Better safe than sorry and have her esophagus and such messed up.

Another thing, do you have hides and such in each snakes enclosure? Hognose snakes are also burrowing snakes and need to be able to borrow to feel safe. 3" of aspen bedding usually works. It needs to be able to retain the shape of the tunnels they make.

I do not, they are in a rack system so it’s mostly dark for them. Since I’m also quarantining them their bedding is just paper towels. I was gonna keep them separate from my others for about 2 months while watching for parasites, illness, or disease. Once they pass that I’ll probably use forest floor, or coconut bedding. I personally like the looks of it better than Aspen. Do you have any recommendations for cheap but good hides? All that I find are expensive or have too many openings.

You can use appropriate sized containers you would use for storing food. Make sure they are not see-through(black is best), and cut a hole in one side. Make sure you have two, one on the cold and one on the warm end. Hognose don’t need a much moisture so using aspen would be best for it, aspen is really good at keeping the shape of tunnels. You would need to keep the others slightly damp for them to retain shape as well. Sometimes it is less about aesthetics and more about what it best for the snake.

@bluefeathurs another thing that is important. Make sure you use shredded aspen bedding, like zoo med aspen snake bedding. Aspen shavings don’t work well and are too dusty.