Female: Brindle
Male: Yellow Brindle, wouldn’t say tangerine as I have some here myself and are very orange. Your boy is yellow. And yes has the fuzzy/furry trait. Nice double row going on!

Keep an eye on your girly, she looks quite small, especially considering you can see the eggs like that! You never notice them like that on my lot! Just make sure she passes them ok, females usually start digging about 2 weeks before they lay

@ghoulishcresties thank you. No pinstripe on that boy? I was still up in the air on that. I do agree on being under weight. I’m doing what I can to beef her up but she seems to be on a fast. She loves crickets so I did give her few extra dipped ones.

Pinstripe is when there’s white lines down the edges, the ridges are typical on crested geckos.

No pin, his laterals are the same colour as his body

What’re you feeding them currently?
And not just weight. She just looks like a diddy girl!

@ghoulishcresties I’ve been alternating the following to see what she will eat and crickets every 3 days.

The boy eats “ok”. The girl not good at all other than crickets now and then. I think previous owner mainly fed crickets. They were so dehydrated when I got them they burrowed in their new bioactive enclosure for 3 day.

I’d mix the growth in with whatever else you use atm, especially with her laying.
And as long as she’s eating crickets that’s good!
Try putting some Pangea on her snout and when she goes to lick it off put the bowl there, usually gets them eating some!
If not just feed some to the crickets and she’ll get it that way!

oh bless him, good thing you have them both now!
Are they separate?

@ghoulishcresties as of right now i have them together. At 1st I had them separated and put them back together to see if it would encourage her to eat more since they were supposely together for a long period of time and possibly bonded if that is an actual thing with geckos.

I’d separate. Especially since the Male is also slim, they can be a pain eating when together breeding and lose a lot of weight quick. He will also harass her to breed which will stress her and can also lead to her being egg bound which I’m sure you don’t want!
No they don’t really bond, I mean one of my males has 2 girls this year, he really doesn’t care, if he gets to breed he’s a happy chap and doesn’t mind who gets introduced to him

So defo do not keep together especially since both slim, she’s about to lay and he will keep mating with her.
What do they both weigh?

@ghoulishcresties i will definitely seperate again right away. Unfortunately I cant stop her from having more eggs due to sperm storage but my goal is to get at least 10g on both of them asap and then to put them on a normal feeding routine.

Both are underweight imo but have gained 3-4g since I got them. Mostly due to hydrating.

Yeah they can store for up to 3 years in some cases.
One of my girls stored for just over 3…

Glad you know what you’re doing, he’s min for breeding, but he looks slim, by looking at him I’d say he could easily get to 50.
And touch wood she puts on nicely still with laying for you, just try get her to eat something even if just crickets!

And I shall Thankyou for being a decent, kind and caring human and helping them! So many people out there treating them (and other animals) like rubbish and it’s awful to see!
Glad they’re in the right hands!
Keep us updated and would love to see any little ones who hatch

@ghoulishcresties will do and thank you. Everyone here has been very helpful.

I agree @kintalo you are doing a great job with them.

It upsets me to see so many bad breeders out there and they usually sell the reptiles on when the problems start to occur.

Hopefully the eggs will make it, however they may be likely to have things go wrong in the long run with mum being fed who knows what and being dehydrated.

Def get the breeding any growing mix into her if you can and Def separate, she might stop producing due to previous lack of care, but like you said she may carry on… But at least she won’t be as stressed.

Going back to colours… I’ve been looking and I think the male isn’t yellow or tangerine but I’d say orange. His not light enough for yellow and not deep enough for tangerine, any more pics with a different background? Or in natural light?

Reverse pin stripes are non-structural stripes visible when the gecko is fired up. A dark stripe will be visible along the very top of the lateral area, but just beneath the dorsal or pin stripe scales. So I’m still unsure on the reverse pinstripe!

Orange and tangerine are the same I’m sure, but depending where you are people call it either orange or tangerine I’ve found. Some breeders say orange some say tangerine.
Most do call it tangerine though like myself, some people selling geckos though are saying orange instead. But if you look them both up you get the same images and cresties.
If you put in yellow he’s defo a yellow, a few sold last year from some high end breeders as was looking into a male myself but ended up down a different road

They’re nice, especially when added to tangerine or red!
And she’s just a normal brindle, don’t usually give them a name usually like beige. As brindles are usually just that colour, I had a few like her back along and also tangerine brindles too when big mama was with Kaneki. Don’t think I’ll be getting anymore with the new pairings now! Will miss them I must say, always first to go along with the tigers couple years back

Here’s one of my tangerines as an example. So you can see your male is a yellow 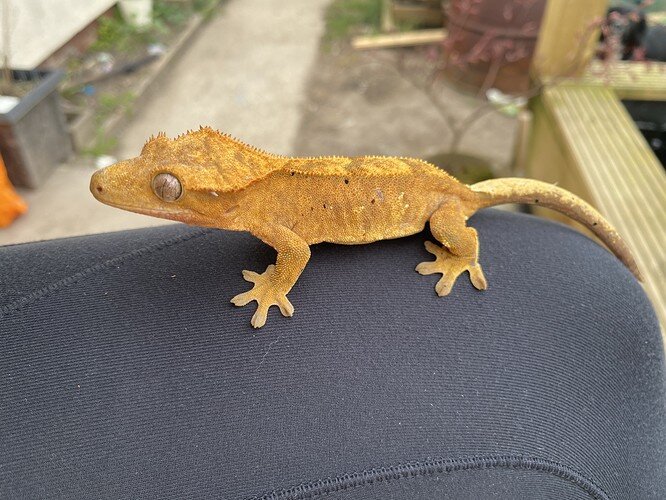 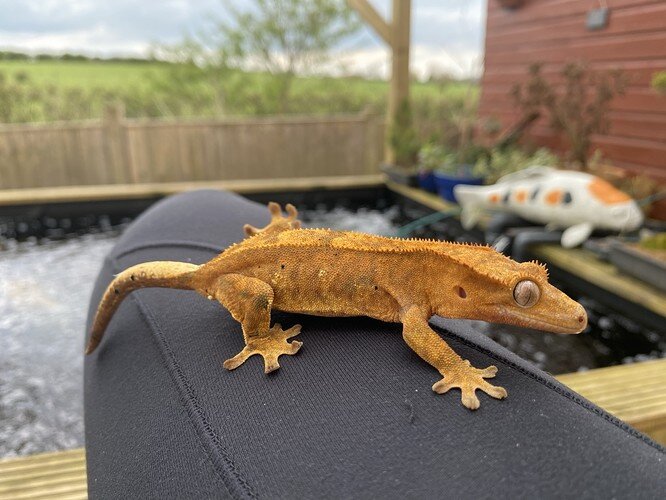 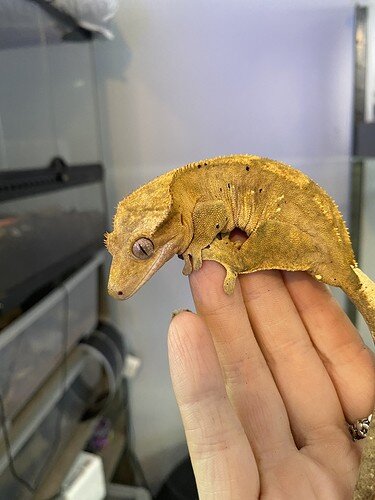 I am on my laptop now and I agree yellow for the male. My phone made it seem more orange orange but my laptop makes it seem yellow lol

Here is a pic of my orange/tangerine brindle to help you compare also, although when un-fired she looks yellow lol esp when she was little.

And agreed beige are the usual colouring of a brindle.

Did not know about the orange & tangerine thing, I thought tangerine was the brighter version, thanks for clarifying 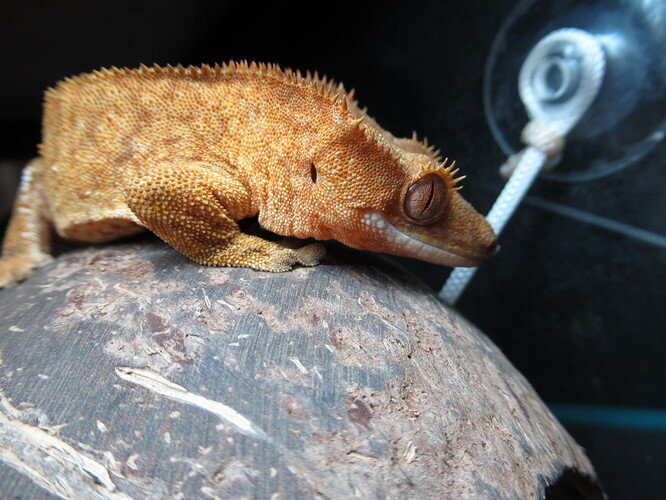 I will try to get some more pics of both of them. Since they are both in their own bioactive enclosures they are fired up 99% of the time. I may give them a dry session for about 15min to try to get them both fired down.

but im still going to try for fired down pics.

I also got the girl to eat pretty good lastnight feeding by hand. I took @ghoulishcresties advice and mixed all the foods I had together. She seemed to really enjoy that.

Variety is the key!

I had to hand feed 2 of my Cresties, i then slowly moved to spoon then food bowl while in my hand and then left her for a few days and she slowly started eating on their own. Hopefully they was the last of it.

I want to say that your male is really beautiful. I love the fluffy line

@lumpy thank you I really love how he looks as well.

I finally got the boy to fire down but couldnt get a picture before her fired back up… He has a tanish look. My wife has a solid charcoal that I would love to breed him with if her packs on the weight by next year.

As for the girl something but she looks the same but her side markings and back pattern fade more. These 2 are so stubborn. Lol

Best to see morphs when fired usually. Especially brindles!
I thought my Tiger was an extreme until she fully fired!