So, I decided to cut my first clutch on day 53 (we’re on day 56 now so the babies should start coming out soon… actually one baby was poking its head out when I went to snap the below pic) The pairing was 1.0 banana yellowbelly x 0.1 pastel het axanthic. I got 3 with banana, 1 normal looking one, and then this oddball: 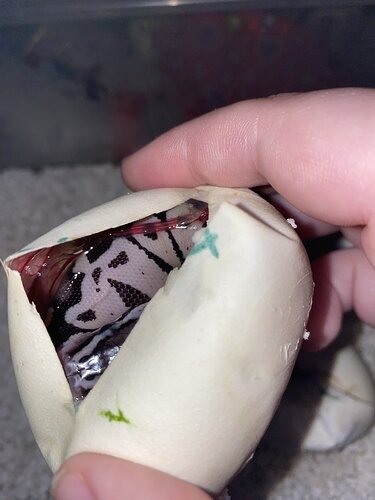 That looks like a super pastel axanthic to me. Would anyone agree?
I know you usually can’t identify for sure until the snake is out of the egg/had it’s first shed, but the black and white contrast really caught my eye.

That’s very odd. Obviously the only way you’d have a super pastel is for your banana boy to be pastel.
Hard to say for sure if it’s a super pastel with that pic, but I’d agree the black and white contrast is making me lean towards axanthic.
That is interesting for sure.
Share a pic once he/she sheds

, congratulations on your clutch by the way.

Thank you!
If anything it’s likely retained sperm, I bought the female as a proven breeder. I’ll definitely have to ask the breeder about it once the baby comes out and sheds and I know for sure what it is.

Of course.
That’s true, very well could be retained sperm.
Either way, you’ll have to pair them again next year or pair him to another het axanthic or visual axanthic and see if he is het for it.
Very cool, I love when stuff like that happens!

I think you are going to have to wait until the baby leaves the egg to know for sure if it is truly axanthic or not. Sometimes babies will look a certain color in the egg.

Very cool. It doesn’t quite look super pastel to me? Your male could be het axanthic and this could be a pastel yb axanthic? Or pastel ax?

Is it possible that 4/5 eggs were fertilized by the male while a single egg developed parthenogenetically? He did say at least 3/5 were banana

Oh I was under the impression that didn’t happen. Thank you for clearing that up, very good piece of information @t_h_wyman

Can you clear something up i had heard that androgensis clutches only produce females is that correct?

And maybe clear up the meaning of this word while your at it. It’s a new one to me so I gave it a Google and I believe it means “only the fathers chromosomes are present during the development of the embryo”… Is that correct?

I was certainly considering that it could be a partial parthenogenesis as well, though it’s super rare so I wasn’t going to count on it.
Might explain why 3 of the eggs died early on, and why a 4th baby died right after hatching. The bananas and the oddball are the only ones still alive, though several appear to have small deformities.

from my understand yes that is correct. it similar to partho except only the male contributes to the genetics of the babies. But maybe @t_h_wyman explain it better or more in depth than i can, or correct me if i am wrong.

Interesting, thanks for the info!

i had heard that androgensis clutches only produce females is that correct?

The mechanisms behind andro and partho are slightly different but, fundamentally, they are the same in that the half genetic load of the gamete gets doubled. When it comes to sex-chromosomes, YY is a lethal combination so you can only get the XX configuration
.
.

Basically it is the male equivalent of parthenogenesis. The father is the only source of genetic material and the offsprings are his half-clones
.
.

Not all that rare actually, I would say there are at least a dozen parth clutches produced in the hobby every year

I agree on waiting until baby is out. My first albinos I’ve ever hatched looked like BELs in the egg. I even called a friend so excited thinking I hatched a BEL and this was 18 years ago. Of course a few days later they came out with yellow.

Either way snake looks great! I completely agree with retained sperm as well

To add to the above, het Axanthics will often look like Axanthics in the egg. Once they come out they tend to color up to normal colors.

Can’t wait to see an updated picture with it out of the egg. That will clear a lot of this up! 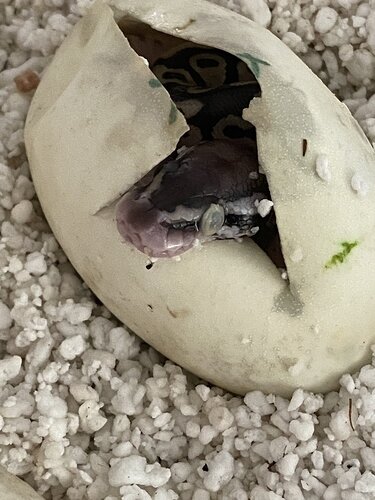 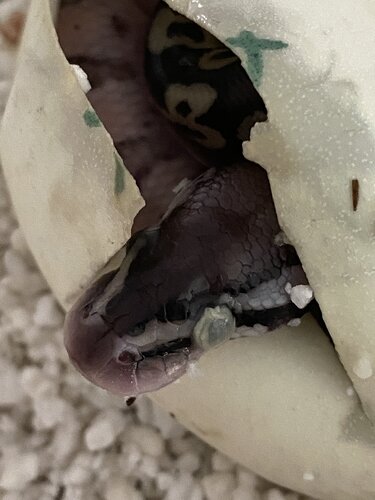 This is a bit concerning, I noticed one eye had been bigger than the other with this baby but now that one eye is turning cloudy and looks crusted over. My research pointed to an infection of sorts, but I’d like to see what others think.