Thought I’d take a moment to share some of my favorite photos from local shoots I’ve been a part of. I’ve been playing the part of reptile wrangler here in the Las Vegas area since 2008 when I answered a Craig’s list ad asking for an iguana to use for photos. The photographer, Mike Lee of Polar Pics, became a fast friend. Since then I’ve had the opportunity to work with a number of photographers, videographers, and models. Overall my experiences within this industry have been positive and most of the folks I’ve worked with have been great.
Credits will be posted below the photos 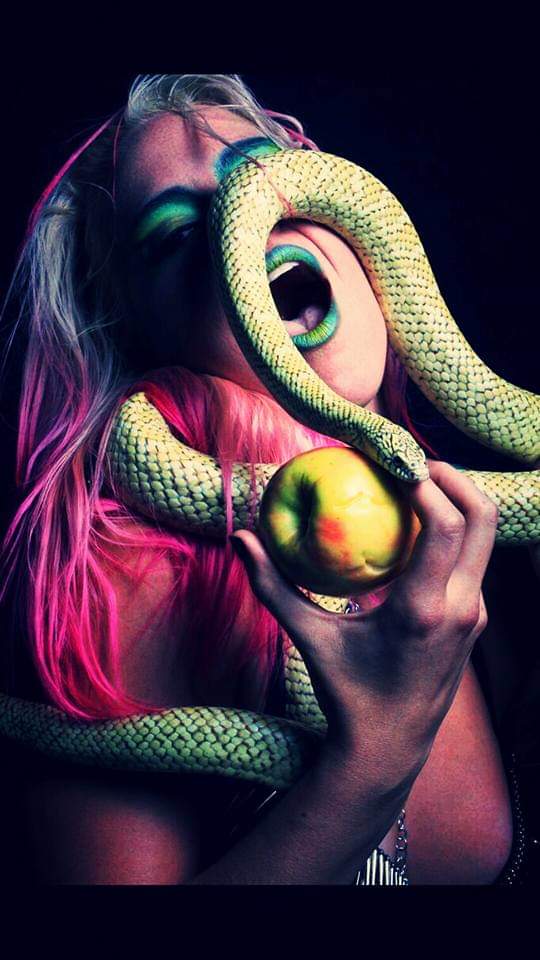 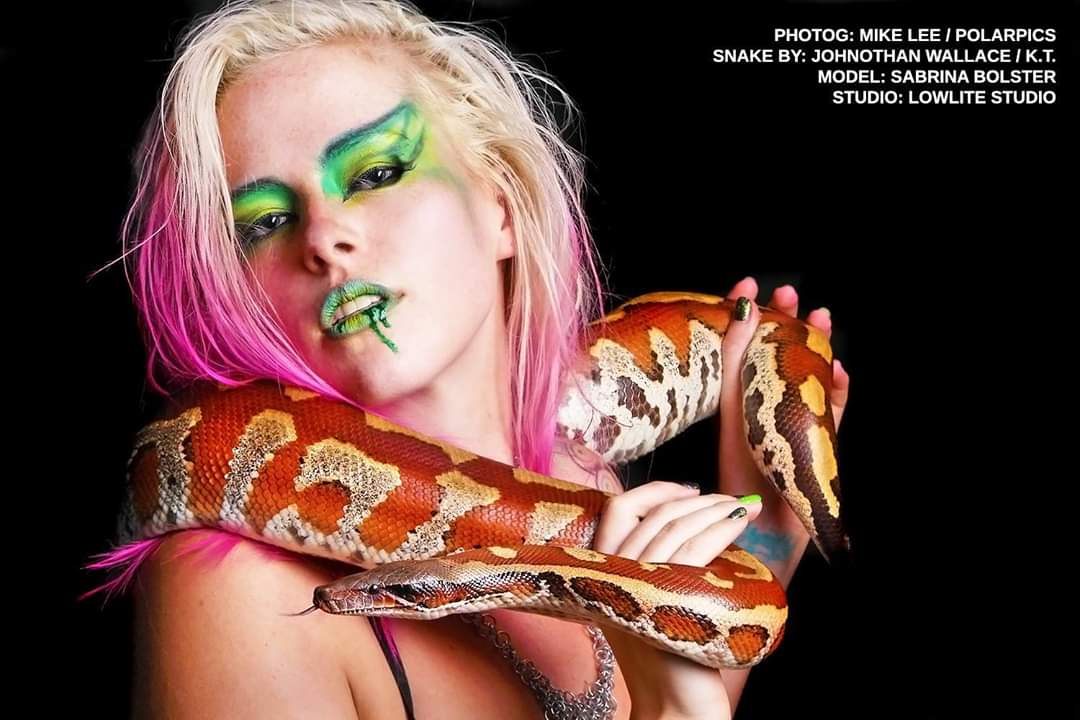 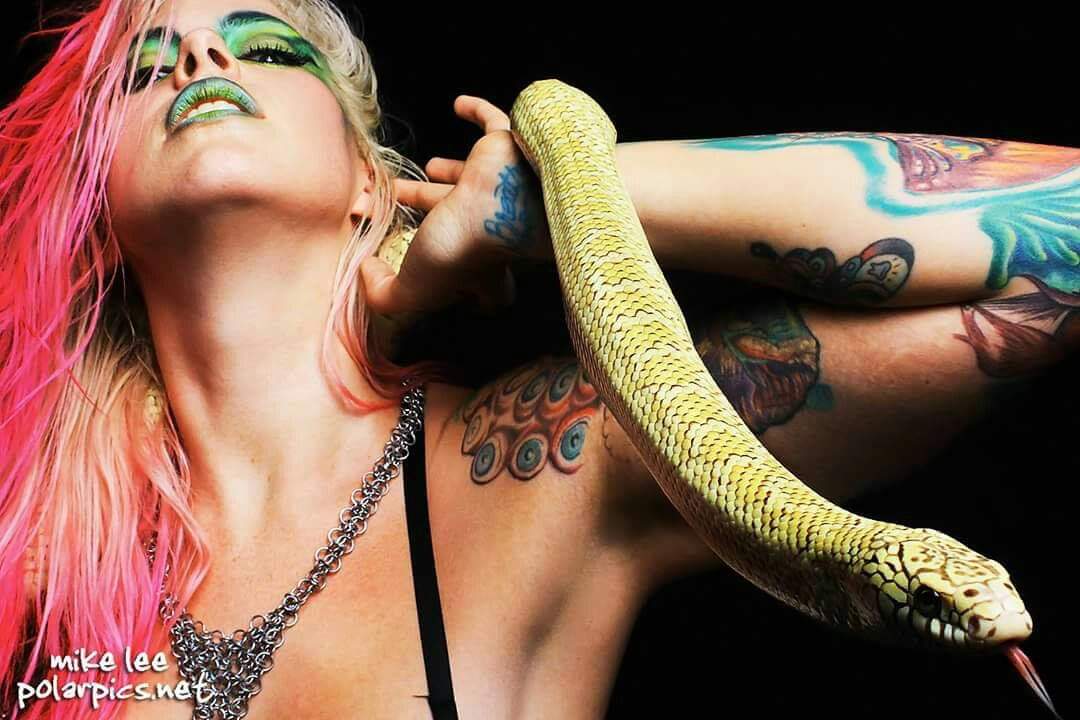 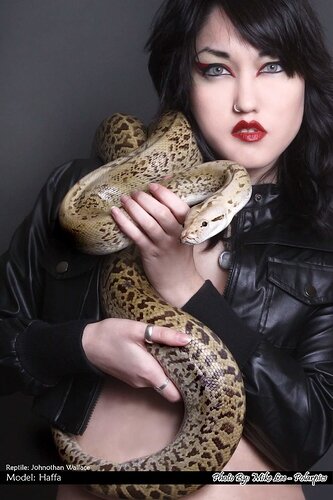 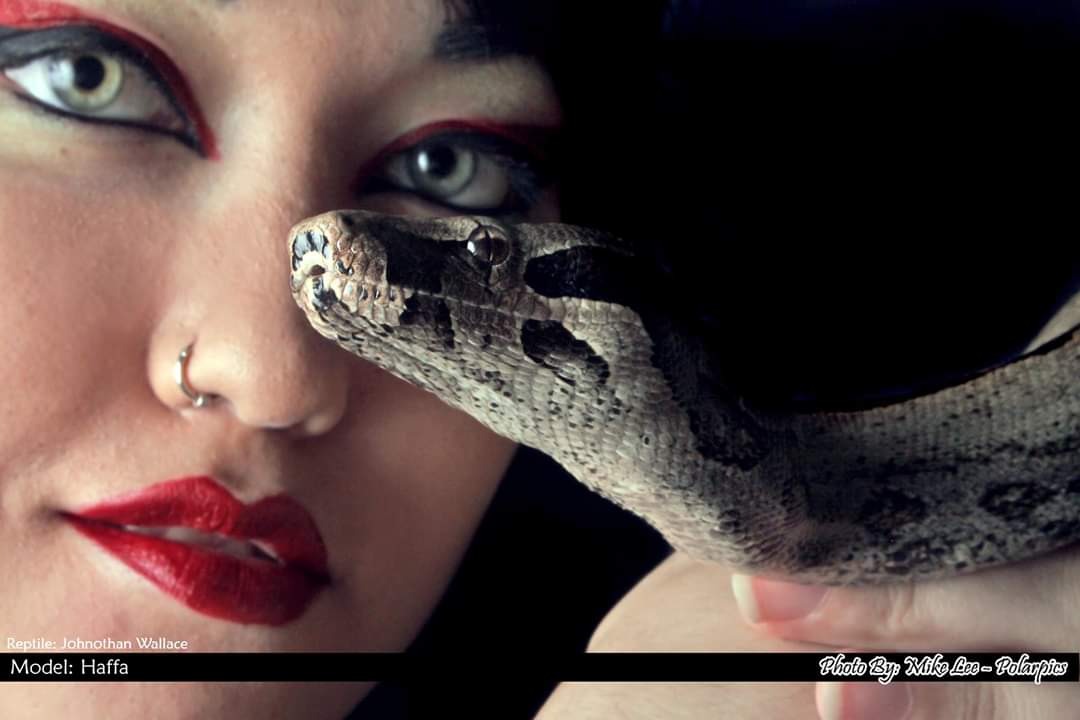 FB_IMG_1544287035908.jpg1080×720 50.2 KB
Photographer: Mike Lee (Polar Pics)
Model: Shannon Haffa
Snakes: Bolivian Short tail boa & granite burmese python
Shannon was another favorite model to work with. She is also a talented musician and just all around fun person to be around. 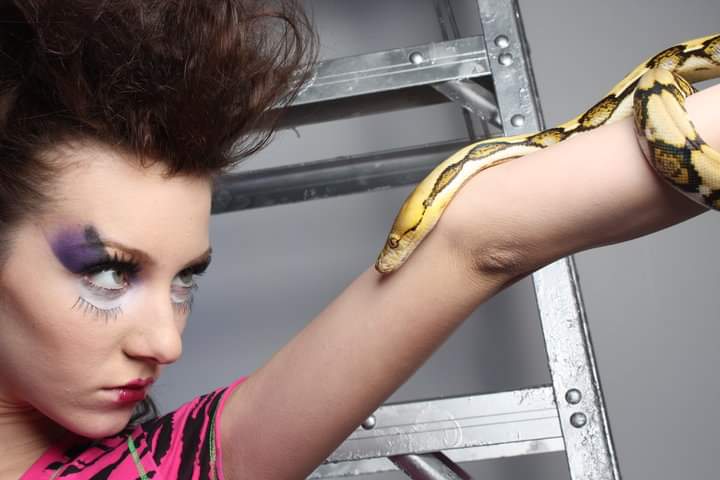 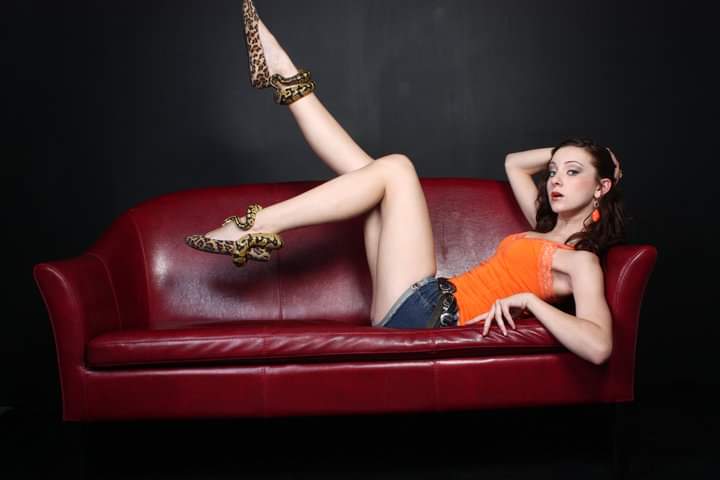 FB_IMG_1544286974380.jpg720×480 18.9 KB
Photographer: Mike Lee (Polar Pics)
Model: Taylor Rae Duffy
Snakes: Ball pythons & reticulated python
Taylor was just 15 at the time of this shoot and it was her first photo shoot with a legitimate photographer. She has since traveled the globe working runways and appearing in fashion magazines making quite the name for her self. She too was a talented singer performed a rendition of Patsy Clines “Crazy” that I won’t forget. 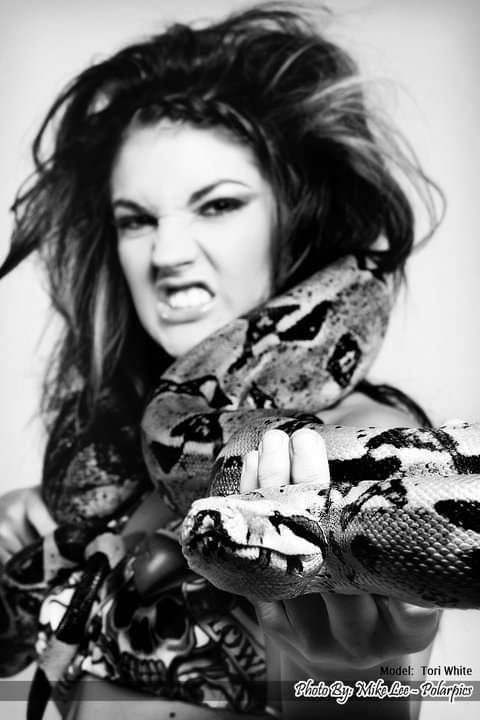 FB_IMG_1544287014255.jpg480×720 38.5 KB
Photographer: Mike Lee (Polar Pics)
Model: Tori White
Snake: Common Boa Constrictor
Tori was a little nervous as this was also her first photo shoot and she had never held a snake so we told her to just growl at it. It may not be a pretty pose, but I’ve always been partial to this one. 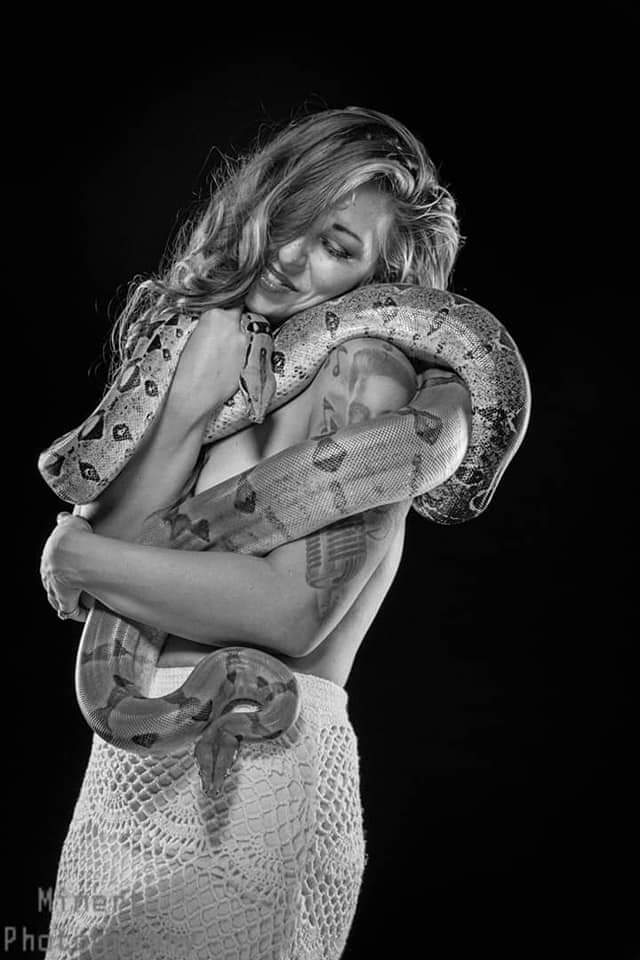 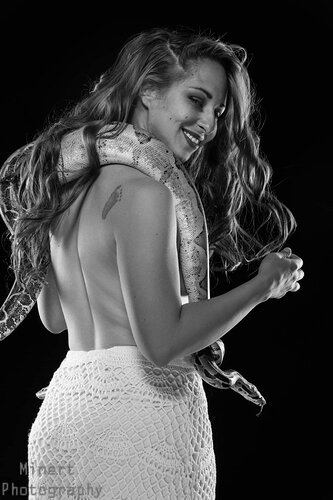 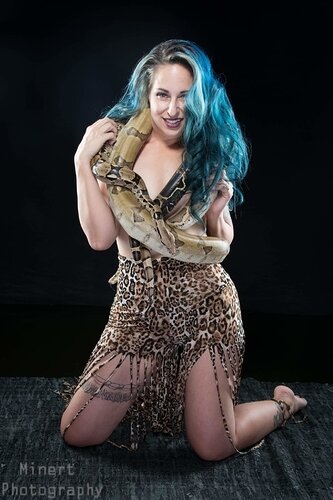 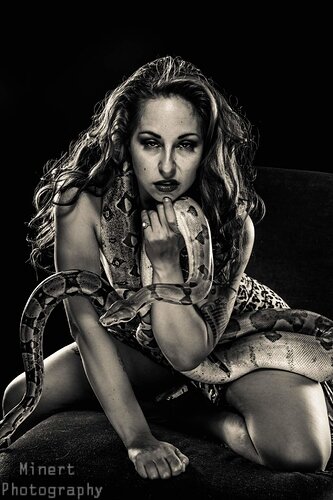 FB_IMG_1561663768733.jpg1365×2048 232 KB
Photographer: Wayne Minert
Model: Blue Amnesia
Snakes: Ghost Boa and normal Common boa
Blue amnesia was a much more recent shoot taking place earlier this year. She was a blast to work with taking to the animals quickly and jumping right in to handling 2 large snakes at a time. 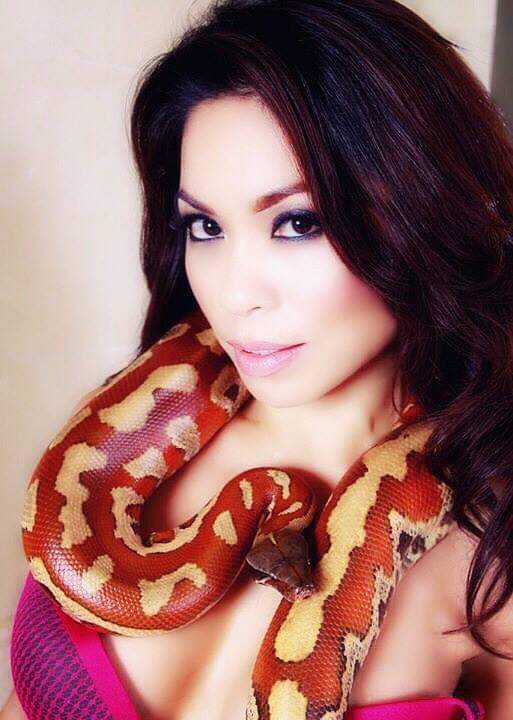 FB_IMG_1569179756206.jpg513×720 48.3 KB
Photographer: Brian Doty
Model: Kristine June
Snake: Red blood python
Kristine is a fitness model whose bubbly personality always makes her fun to work with. I have more photos I’ll have to hunt down and post later. 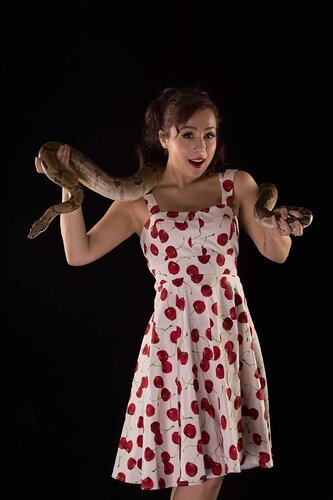 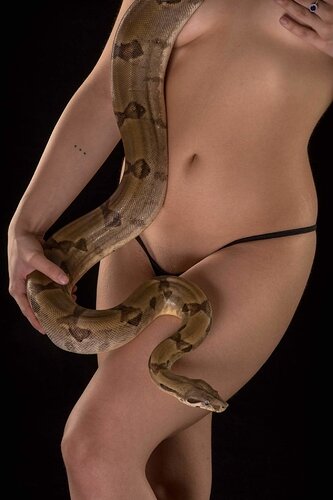 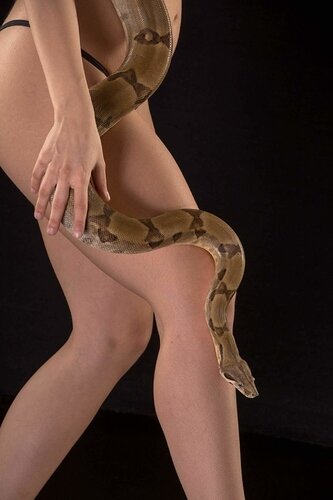 FB_IMG_1531873204225.jpg1365×2048 106 KB
Photographer: Wayne Minert
Model: Drew Edelman
Snake: Ghost Boa
Drew is a very talented Las Vegas burlesque dancer with a great personality. She was great fun to work with could hardly put Gozer down once she cozied up to him. 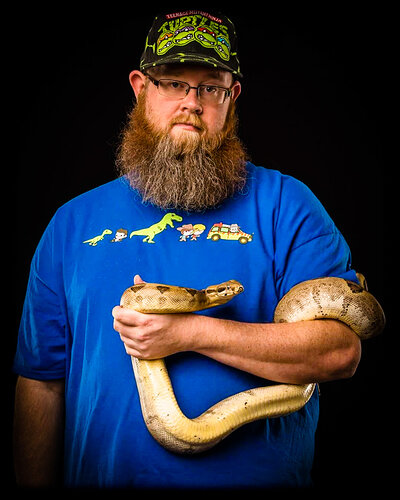 PSX_20180717_182436.jpg1080×1350 203 KB
Photographer: Wayne Minert
Err model… lol yours truly
Snake: Gozer my ghost boa
Some times the photographers will ask me to step in front of the camera so they can adjust lighting while the model is getting changed.

That’s it for now folks. I hope you enjoy the pictures and feel free to share the post. I’ll post more pics over time and as new gigs are completed.

These are some quality pictures… Especially that last one, who ever that man with the beard is needs a modelling contract

Really though it’s nice to see how one hobby can interact with another and create lifelong friends and business partners, in areas you would never have ventured into otherwise.

I love doing these types of gigs for a multitude of reasons not the least of which is that I always end up teaching them about the animals. Most have been genuinely intrigued and want to learn more.

There is nothing better than someone taking a real interest in what your passionate about. Just one conversation you have could lead to you changing someone’s path of life for the better.

I bet you don’t even know how many you have brought into the hobby that weren’t doing so well in life but because you gave them just that one spark they found a new love in their lives.

These images were created by taking photos of my Suriname redtail boa from multiple angles and positions and then some expert level photo editing by the photographer. Even Medusa’s body is my snake this is one of the coolest end products of any of the shoots I’ve done. 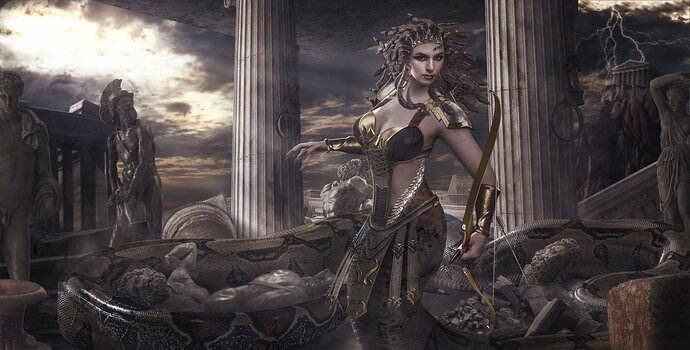 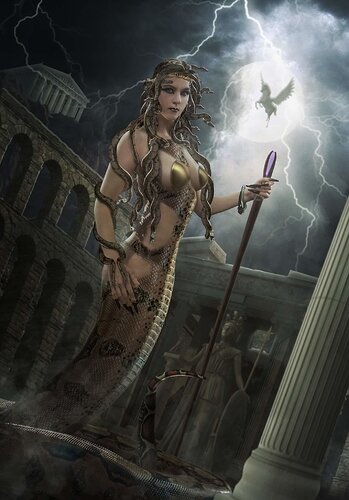 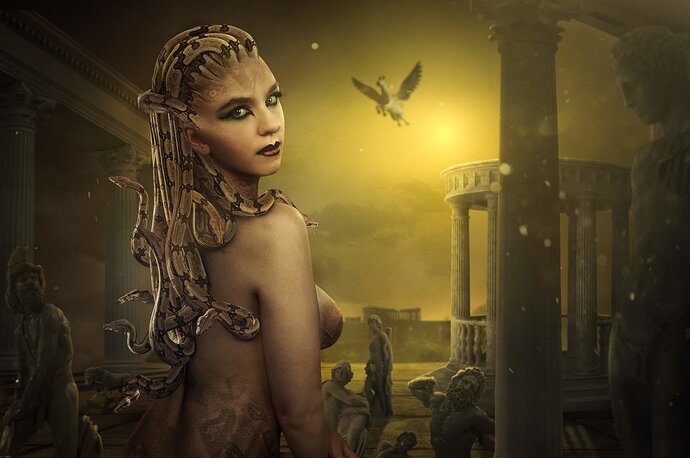 Future Suggestion: Some of these photos (in personal opinion) a little “Mature Rated” and I would ask that they be “blurred” as a content warning for people with weak eyes like mine.

Some crazy photos. I enjoyed Tori growling at the camera, I liked that one a lot.

I don’t see how it’s mature rated. No nipples or anything worse than a lady in a bikini. No mature rating needed if there is no “female presenting nipples”.

I say this belongs more in this topic:

I’m really happy you bumped this thread up. I didn’t see it before and man those are very good photos and publicity supporting the herp industry.
Cool work man!

Your right that it would fit in that thread perfectly, but I think having its own will keep the place tidier and also give users that are sensitive to these sort of images the option to take part in one and avoid the other.

So wonderful, how did you get the blood python to be so calm?

Bloods can be very calm. You need to handle them often to get them to trust you. Once they do, they’re very calm Ive found.
Kinda like a retic, just daily handling with letting them do as they please while in your hands. The less restrictive of their movement you are they more confident and comfortable they will become.

That blood python was a total sweetheart.