I tend to notice a lot of spider morphs going for quite a bit, I was wondering what the general consensus on this gene is? Why is it still being bred?

I tend to do my best to keep informed on both sides to an argument but I was mainly concerned because of my previous experience with spiders at the rescue. We always provided them with the best care and stress free environments but still exhibited quite severe wobbles. Although like someone had previously mentioned, I understand that it may be unfair to look at rescued spiders who likely came from a less than ideal home, outside of that I do admit that my experience with spiders was limited; hence this thread.

I’m here to learn about different experiences with spider, to build on my own understanding. Please do not assume my prior knowledge comes from a youtuber

Because it produces amazing animals. The bashing spider movement is from people who generally know nothing, never owned a spider, never bred them but heard from someone who heard from someone who watch a video once. Sure they wobble to a degree however train wrecks are rare, in most cases it will be hardly noticeable at all and if kept properly a Spider will thrive and do exactly the same things any other BP with any other paint job will do.

Ironically Spiders are the focus of the bashing when other mutations exhibit the same issue as well so really if people wanted to be fair their would bash those other mutations as well.

I owned and produced Spiders until 5 years ago.

I understand what you mean but I’ve seen quite a fair amount of spiders struggle with feeding and balance while at the RSPCA, we even had one bite itself quite badly once. And that was all first hand experience. I suppose I just don’t see the appeal in an animal that visibly struggles to function a lot of the time. Although I heard there are different degrees of wobble, how can you know for certain that you’re producing healthy offspring?

Most do not struggle but you do need to know how to keep them and they should be kept slightly cooler 86/88 range top.

The degree can vary from one animal to another and a severe wobbler can produce a mild wobbler and vice versa, it can change over time and it can change with stress and husbandry.

I have produced spiders and combos and never had a severe wobbler that did not live a normal life or had to be euthanized.

This is really helpful, I didn’t know lower temperatures played a part in their wellbeing! I was hesitant while looking at some gorgeous Queenbees, but I may actually bite the bullet if their wobble is mild.

I think it also pays to keep in mind that, if you are working with a lot of rescued animals, they may not have been kept in the best conditions. Bad husbandry makes the wobble worse. It can also cause wobble in snakes that are not born with it. This may be the main reason breeders say there is no severe wobble in their collections while pet owners, specifically the who take in rescued snakes, end up with spiders that have a severe wobble.

People focus on the genetics so much that they fail to take husbandry into account, but husbandry is responsible for so much of an animal’s health. You can’t keep an animal in bad conditions and expect it to be healthy.

If that were the case, could the same be said for the enigma gene in leopard geckos? I was just wondering if the two were comparable at all.

I work with a good amount of spider in my collection. Here are some things I do to help with wobble issues. I never feed my spiders live prey some do to each there own. Baby spiders I hatch after a few meals I immediately switch them to frozen thawed meals. That removes any risk of feeding. Have a few of mine missed sure, but with feeding frozen thawed I just move the prey item slowly back in front of them, and bam they hit. My spiders are my Best feeders. They are bottomless pits. Also I keep my spiders in a low traffic low stress conditions. My spiders aren’t kept in the middle of my living room where everything and one can see them. My snakes are kept in their own bedroom. None of my other pets are allowed in that room. I tend to keep the room on the darker side to help them feel secure. The only time mine get crazy with their wobbles is dinner time. The excitement of eating just does them in. They will wobble or cork screw when they smell dinner. They eat every single time. I really love spiders. They are by far one of my favorite morphs. Shame they get so much hate. Like others have said above me there are other morphs out there that Wobble yet they don’t get nearly as much hate. If you have the chance to get one give them a try. You may find yourself pleasantly surprised how much you will fall in love with them.

May I ask what other morphs tend to wobble?

A few I’m aware of: HGW, champagne, spotnose (more the super). I’ve heard that chocolate/sable may, but I’m not sure. I’ve also heard that, like the spotnose, it’s more of a problem with the supers. HGW and champagne are also both double lethal. I’ve heard that champagne shouldn’t be crossed with any of the other wobbling morphs (champagne spider being lethal) and that there have also been problems, although less serious, with chocolate/sable spiders.

I’ve got my heart set on a gorgeous pastel spotnose butter, although I don’t think it’s a super.
Thanks for letting me know though, I had no idea the wobble occurred in other specific morphs. Also, what does HGW stand for?

I think the best generalization is stress seems to bring out the wobble more than anything. I’ve seen first hand how spider in a friend’s care showed no wobble, sold to someone else who I assume was less than qualified, snake came back a month or so later with a terrible wobble. Took a couple weeks in his care and it was back to showing no wobble. Just the most extreme example I’ve personally seen.

This doesn’t mean there’s a magic way for all spiders to not show wobble, but there are outside factors than can affect it. Doesn’t surprise me a rescue would have a lot of bad wobble examples.

I’ve worked with many Spiders! They are one of the best morphs in the market today. I worked for Kevin at NERD for 5 years obsessed with his huge collection of animals. I’ve seen the very FIRST bumblebees, albino spiders, honeybees, killer bees, Axanthic spiders, Axanthic bumblebees, Axanthic killerbees, coral glow spiders…etc oh and tons of normal spiders through the years!

This spider bashing is nothing more than high school drama. People who want attention and create drama. The gene is excellent! And if your not willing to invest in it than it’s completely yourloss!

Its really sad to see one of the morphs that BUILT this breeding market we have today get bashed so much. It’s unfair to the gene that has given us so much back. 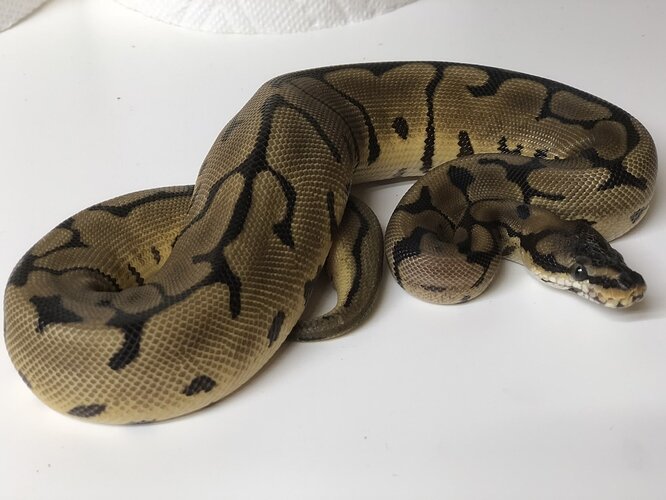 May I ask what other morphs tend to wobble? 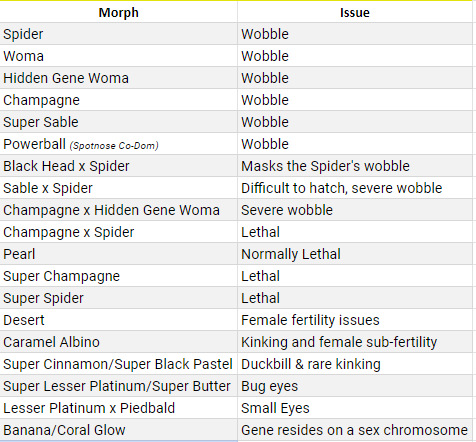 I have 5 spiders and a couple hgw. I feed live, but house in short and simple tubs. They wobble to varying degrees, but not significantly and they eat without issues.

@herpjay IF it was a proven animal welfare issue I agree 100%. Just because they look cool would not be an ethical reason to breed them if it was true that a wobble caused them to have poor quality of life. Period.

However I do not believe that it is at ALL after doing hours and hours of research because when I first joined the hobby I saw a YouTube video that a well know herp-er (who shall remain nameless but I have ZERO respect for) made saying how awful it was. I was so alarmed I immediately just agreed but after digging and digging all I found was people talking about how bad it was…or the really gross ones showing animals they had intentionally stressed out to “prove their point.”

Then I watched extensive content by proponents of the gene where they showed ACTUAL NORMAL keeping and handling of the animals and it put my fears to rest.

For anyone considering this issue though if you feel in your conscience that you shouldn’t buy or breed spiders, DONT.

(Just also don’t be those people talking out their rears chastising others).

ily all. Gotta go freshen some water dishes and do some handling ttyl

Readers digest version is there is no ACTUAL evidence proving or even suggesting that a snake with a “wobble” can’t have a great life, but I support everyone using their best judgment in picking their animals and giving them proper care.

Just please don’t give certain [in my opinion animal abusers] clicks and buy their narrative when they are purposely stressing their snakes to “prove a point.”

Edit : lol I was replying to your first version of the post, but it’s changed now.

I tend to do my best to keep informed on both sides to an argument but I was mainly concerned because of my previous experience with spiders at the rescue. We always provided them with the best care and stress free environments but still exhibited quite severe wobbles. Although like someone had previously mentioned, I understand that it may be unfair to look at rescued spiders who likely came from a less than ideal home, outside of that I do admit that my experience with spiders was limited; hence this thread.

Unfortunately I can’t seem to find all too much on positive experiences with wobbles, probably due to the fact that in most cases people won’t mention anything unless it’s severe or negative. Or I’m not digging enough. Any sort of positive experiences and proof is always appreciated on my end.

Just as a disclaimer, I wasn’t at all jumping the gun on spider being fatal or unethical. I was simply asking people who had other experiences with them to mine.

Rescue makes a huge difference. A rescue pastel could some serious issues at that point. But fair enough I do not have that same experience myself I can’t say that I do lol