Hey everyone.
I just had some questions with ethics selling super dwarf retics.
I know for you to classify a retic a super dwarf or dwarf it must have 50% overall super dwarf or dwarf blood in it. That’s the industry standard and has been so for years.
My question is why do I see 25% super dwarf retics in the super dwarf section? Personally I believe the sellers who post these snakes for sale shouldn’t be allowed to put them in the super dwarf section. They are basically mainlands with a little SD/D blood in them, and not nearly enough to really contribute to the overall size of the snake.
And technically if you have a retic at 37.5% super dwarf and 12.5% dwarf, that’s classified as a dwarf retic, not a super dwarf. I never see adds reflecting this information.
I’d like to hear some reasoning some of you might have on why our hobby continues to market these snakes for what they aren’t.
If I produced a retic with 25% dwarf or super dwarf blood in it, I’d call it a mainland first and then let any interested buyer know it has a small % of SD/D blood in it. That in my opinion is the correct way to market your animal.

I cannot speak for the seller but if you follow Garrett Hartle at all he explains in a few of his posts/vids that you can maintain the super dwarf phenotype with a small percentage of actual super dwarf blood by using the small stature females as your breeder. Biologically, the eggs, and therefore the embryos, can only be so large and that then carries over into ultimate adult size.

Doing this, he has animals that are, I believe, four or five generations removed from the original super dwarf progenitor but still maintain the super dwarf size

I do follow Garrett. He among a few others are my go to for SD/D retic information.
I definitely agree with those theory’s, as I believe they have been proven. Small female equals small hatchlings.
My overall concern in the retic market is when uniformed buyers buy say a 25% SD retic that has not been produced from a small mother. No matter what the overall percentage of the snake in question, if it came from a large mom, the babies will most likely be large as well.
And with the misconception that if it’s a SD/D, it will in turn be a small snake, which we both know isn’t true.
I’d just like the market of SD/D sellers to understand that the industry has a standard of 50% to allow someone to call it a SD/D. And I believe if we all follow those guidelines, the retic industry and overall retic experience would greatly improve.
Idk maybe I’m asking to much from the ethic side of selling SD/D but one day I hope all sellers of this terrific species would follow the industry standards set by the pioneers of the SD/D market. Because not everyone knows that the % doesn’t attribute to the overall size of the snake. And some breeders still use mainland females with high % males to get that extra sale out of it. Not all but some and that I believe we all need to correct as well for the better of the retic lovers and sellers.

This is an interesting topic.
With everything you have to do your research and buy from reputable breeders.
I don’t think anything less then 66% should be labeled supers.

Oh definitely. I’d agree 100%. I think all buyers should do proper research whenever buying any reptile for the first time. When I bought my first mainland, I can’t remember how many months I researched and made sure it was the right call for me.
It’s a hard call, I agree with the standard of 50%. But as previous stated, you definitely want to do your research and buy from reputable breeders.
For example, my most recent purchase I picked up a pair of 43.75% Kalatoa 6.25% Jampea. The breeder who I purchased from told me these aren’t not super dwarfs by the industry standards, they are dwarf with mostly SD blood contributing to that. They came from a small mother but he still was sure I knew he wasn’t trying to sell me something they technically aren’t classified as.
That to me is very good standards to hold ourselves to when we produce and sell super dwarf or dwarf retics.

That’s one of the things I really appreciate about Metcalf Reptiles SD/D adds. They let you know their retics under 50% total SD/D blood don’t meet the industry standards of being labeled SD/D. And they also tell you what you would need in terms of % to make what would classify to be a SD/D.
That’s how I hope to see adds in the future referring to SD/D blood and %.

I agree with the standard of 50%

Here is the thing, and I say this without being in the retic game at all, the 50% number is straight BS because it means nothing ultimately. Garrett’s animals show that by being 12.5% and staying small stature but It goes the opposite direction as well and in a bad way.

If I breed a SD to a mainland, those babies are 50%ers. If I breed two of those 50%ers together, all of the offspring are, technically, 50%ers as well but the bellcurve on them means that some will be closer to SD stature and some will be closer to mainland stature. And if I take two of those mainland stature 50%ers and breed them together then I again get 50% “SD” offspring and I can label them as that according to the industry standard but they are going to grow up to be mainland-size.

For me, percentage means nothing because it is about the actual phenotype and not some nebulous, untraceable degree of “bloodedness”. A pedigree system like what higher-end chondro breeders use would be a more intelligent system, showing the adult size of both parent which would be a more accurate guide to likely adult size of the offspring. But I do not see the majority of SD/D retic breeders adopting that methodology

I would agree that percentages don’t mean anything. That’s not what I’m trying to get across when I say I agree with the industry standards of 50%.

Not all SD breeders are like Garrett, I wish they were.
And I’m not concerned on size for 50% bloodline retics, it’s more a the pattern influences those island subspecies bring to the table. I just don’t like people labeling a retic a super dwarf when it doesn’t meet the standards the good breeders hold themselves to. Any retic has the potential to reach long lengths. It really depends on feeding regimen. I’ve seen male mainlands at 7ft and 10yrs old and then on the other hand male SD/D at 7ft and 2yrs old.
And like Garrett says they are more marketing terms to sell more snakes. I’d just like breeders to be held to a higher standard instead of the monetary value that comes with SD/D.
And really that’s why I do my research over and over again before buying retics.

I’ve really enjoyed your feedback, and I hope some others in our hobby( especially breeders) could hold themselves to the honest and good nature I feel you provide this community.

Not all SD breeders are like Garrett, I wish they were.

I wish more breeder across the entire hobby were more like Garrett
.
.

I’d just like breeders to be held to a higher standard instead of the monetary value that comes with SD/D.

Sadly, money seems to be the greater motivator for a sizable portion of the people in this hobby
.
.

And really that’s why I do my research over and over again before buying retics.

Smartest thing anyone in the hobby can do is exhaustive research before they get their animals. Another thing that, sadly, too few people do
.
.

I have enjoyed the conversation as well
.
.

and I hope some others in our hobby( especially breeders) could hold themselves to the honest and good nature I feel you provide this community.

There are lots of good people out there, sometimes you just have to hunt around because many of them have gotten tired of the infighting and arguing and so they tend to just lurk in the shadows.

I would agree, there are many good people in this hobby. And unfortunately I think that’s true too, with all the arguments and very opinionated people in the hobby, it does tend to keep some quiet.
All we can do is our part and hope others follow the good example some have made like Garrett.

Great conversation. People purchasing dwarf/super dwarf retics have to be careful. I got my super dwarf from nerd. He is 50% kayuadi locale, but more important his mom is 7.5 ft and his dad is 6ft. I think I have a good chance of Little Big Snake staying a manageable size. (this is important to me because I don’t have the facilities or skill to manage a mainland size retic)

They sure do. People don’t understand sometimes how much research it takes to truly understand SD/D genetics. There are so many different opinions and sides of the story, you really need to take it all in and use your best judgement with who to go with.
I believe you have a very good chance with Little Big Snake staying a easily manageable size. Kevin from Nerd is amazing, and he’s truly honest and well respected.
And like you I’m the same, I know what I’m comfortable with as in size and since I handle all my snakes alone, I need to make sure they will stay smaller or at least under 13ft, which is my comfort level as of now handling alone.

I won’t even begin to claim an understanding of the genetics but I believe I know enough to make an informed purchase. I chose to go with NERD because of their reputation and Kevin is an amazing person , I’ve read a few of his books and I trust his breeding acumen and honesty.

Oh I’m sorry, I wasn’t saying you in particular don’t understand, just the general public.
I’m still learning genetics too, I know enough to feel confident in my purchases but always more to learn.

No apology needed, I was agreeing with everything you said in your post.

I’ve always wanted a retic from Kevin. But I’ve gotten all of mine from local breeders or friends. I have a hard time ordering reptiles offline from previous bad experiences. I’m sure Nerd would be safe to buy from in regards to shipping, but I’m still overly cautious.

I’ve never had a shipping problem, but I can see how it could put one off. Little Big Snake arrived safe in a custom box with guaranteed return shipping if he wasn’t picked up. 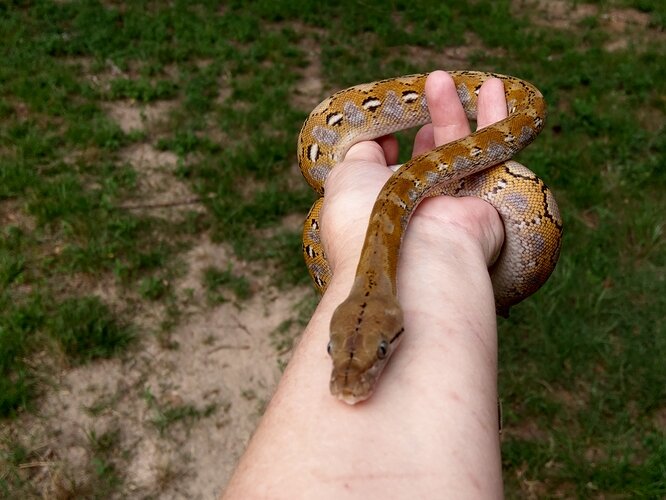 That’s a beautiful Platinum! Man Nerds snakes are always stellar.
That’s a nice guarantee for shipping too, I’ll have to look into that. Thank you!

I personally agree with the 50% standard, it’s unethical to market anything under 50% as a super dwarf, and forcing something to be over 50% to be considered a super dwarf would be too great an obstacle of entry and would wrongfully null & void many current animals and breeding projects.

At the end of the day I think we can all agree that everyone needs to watch Garrett Hartles videos, and ask the correct questions before buying a dwarf/super dwarf.