Welp, this is where we’re at. She laid most of these sporadically over the last few days and then I came home to a bunch of them in the lay box last night. I think she’s empty now. 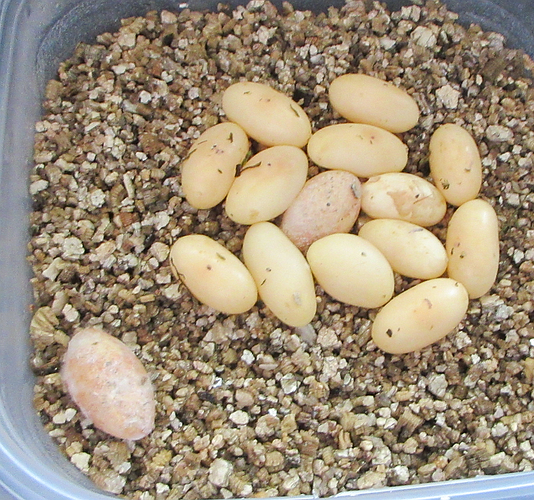 IMG_5884.png692×647 915 KB
Pretty sure they’re almost all slugs. Only two have any calcification, and only one is more than half calcified, though it still has windows. So likely lots of slugs and potentially one boob egg.

The first two look dead inside when candled and are molding rapidly, so I’ll probably throw them out. I’ll keep the rest until I’m absolutely certain nothing will hatch from them. Not expecting much. Maybe one baby hognose if I’m lucky. I wonder what went wrong.

That sucks, I have a female about to double clutch so I’ve been throwing my male at her until she ovulates. She is getting dusted mice every 5 days and just chowing down on them.

I’m glad to hear she is empty. Retained eggs can cause a lot of issues. If you have a different male you may want to see if you get different results. Sometimes these things are just mysteries, for example I have a female that slugs out and then produces a great second clutch every year. It could be a timing thing that I am doing wrong that is specific to her, even though all the other females are on a similar schedule and produce like clockwork. Keep at it - better luck next time!

That sucks, I have a female about to double clutch so I’ve been throwing my male at her until she ovulates. She is getting dusted mice every 5 days and just chowing down on them.

I’ve been wondering if maybe I didn’t throw my male in long enough. I had them in together off and on for several months, but I only saw them lock once. I just assumed they did it plenty while I wasn’t watching, but I could be wrong.

If you have a different male you may want to see if you get different results.

Unfortunately, I don’t. Just the one. I do have another female though, so I’ll give him a chance with her before I think about buying another male. As for the normal girl, I’m probably going to give her some time off, unless it looks like she’ll double clutch. What are the signs in case she does? Same as the first?

Think of double clutching more like piggy-backing on the first clutch. There may be exceptions to this, but I don’t think they will start a brand new cycle in the same year they already did.

If she still has good weight and an appetite after laying then I let them tell me if they want to double clutch by offering a very small meal the day after they lay. If she takes it then I’ll put in the male after another day and then feed her normal a few days later and then try the male one more time after a short break. It seems like if they don’t get it done in this short time it probably won’t happen. I’ve only ever gotten 2nd clutches laid while the first clutch is still incubating, so it happens quick.

When we noticed the girl building we asked some of the breeders in our area for advice. We put the same male in and they haven’t separated. It’s crazy, their pairings before the first clutch would last 3 or 4 days before they would move to opposite sides of the tub. This time they have been coiled up together and locking A LOT. I’ve been separating them for feeding and the male starts going crazy once he has some food in him.

She’s about 300 grams right now and looks really good. If I hadn’t picked the eggs out of her enclosure I wouldn’t have known she’d laid. She only lost about 50 grams. So I think she could go again, though I’m not sure I want her to.

I haven’t tried feeding her since she laid, but tomorrow is feeding day. I’ll see if she takes a meal and take it from there. @Critters_Creatures, what are you dusting your mice with?

Calcium powder. I sprinkle some on a plate and roll the mouse on it.

Quick update: she took the mouse without hesitation. So I put the male back in a few days later. She started bobbing her head right away. Figure I might as well give it another shot, since she seems happy to see him.

The slugs she laid earlier are all very yellow now. I don’t think even the one that had some calcification will hatch.

The ones I paired up for a double clutch finally separated after a week and a half. I saw them lock a lot while they were together.

She’s locking with the male right now. They’ve been together for several days now, but I’m not sure if they locked earlier or not as I’ve been trying to distubr them as little as possible. This girl gets anxious and pulls away from him whenever I open the tub.

So things are looking good for her! I also decided to throw the slugs out. Here’s how they looked before they went: 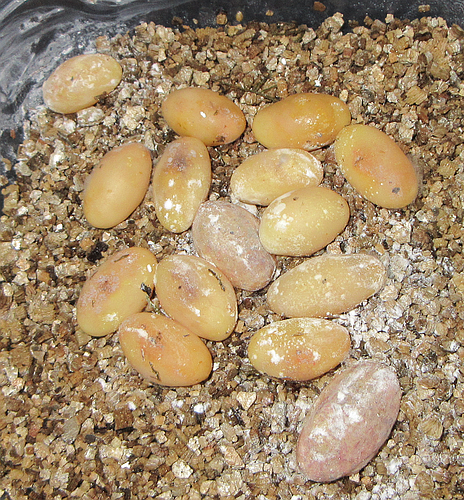 Perhaps it was a hasty decision, but I couldn’t bare the smell anymore.

Didn’t catch them locking, but I caught them cuddling afterward. 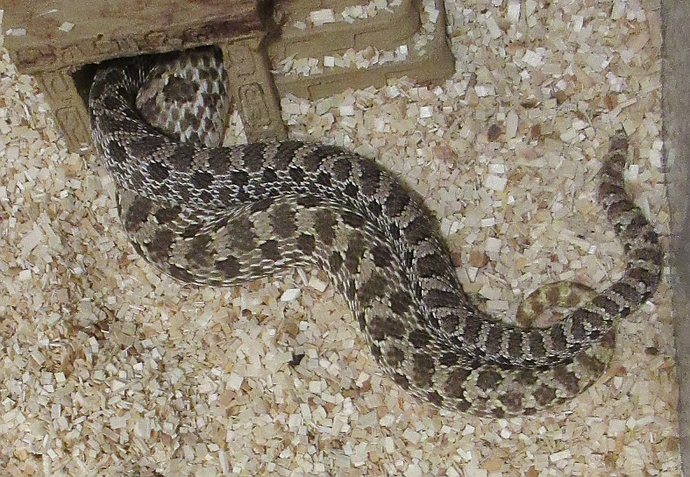 Sorry to resurrect an old thread, but I found this today! 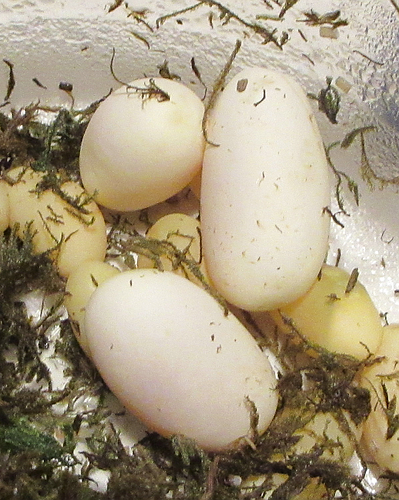 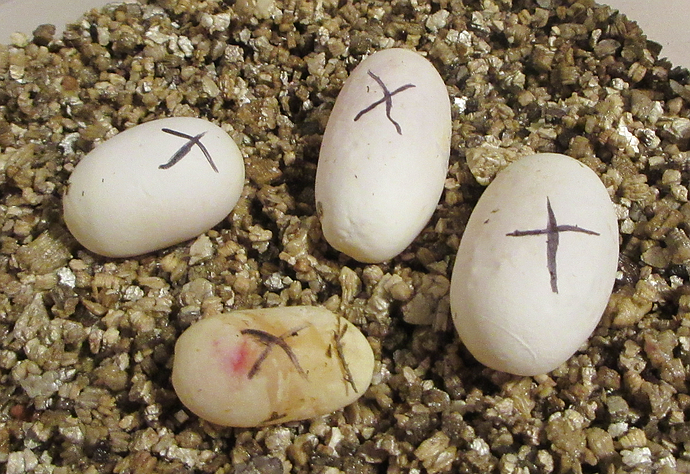 Curious to know what ended up happening?

They’re doing really well too, I’ve got them all on unscented pinkies and they’re eating 2x a week with no refusals.

Do you keep your male and female together year round? Also new to breeding.

Hognose should only be together when breeding and we are talking 24 to 48 hours at the very most.

I don’t keep them together. I just put them in until the male locks or a few days have passed. Usually they lock pretty quickly though, if they’re going to at all.

During breeding I leave males in a few days before giving them a few days off. Based on how they behave I suspect keeping them together year round would annoy the female and eventually the male would die from only caring about one thing! As with anything in this hobby there are probably occasional exceptions to the rule, but I would not ever recommend this one.