Teeny Tiniest Ball Python Hatchling I have ever seen

I have to share a few pics of a hatchling from my last clutch that hatched for this season.

To my surprise, this little one decided enough is enough and hatched one week earlier than any of his/her clutch mates (not sure if it’s male or female yet - frankly too scared I might hurt it!)

I haven’t weighed baby as yet, as I was afraid it wasn’t gonna make it.

Sorry if the quality of the pics are bad, but didn’t wanna disturb or handle too much, it is still early days of hoping for survival.

Mother of the baby is a Yellow Belly and dad is a Pastel Pinstripe Spider.

For comparison I placed a few objects next to Miracle, a cigarette, Marker, Head Band and Lip Ice, this should give you all an idea of how small baby is.

Has anyone ever experienced this before with such a small hatchling and it coming out a week earlier than it’s clutch mates? The last of the clutch has pipped but is still in the egg.

Sorry for the long explanation, but I absolutely had to share this. 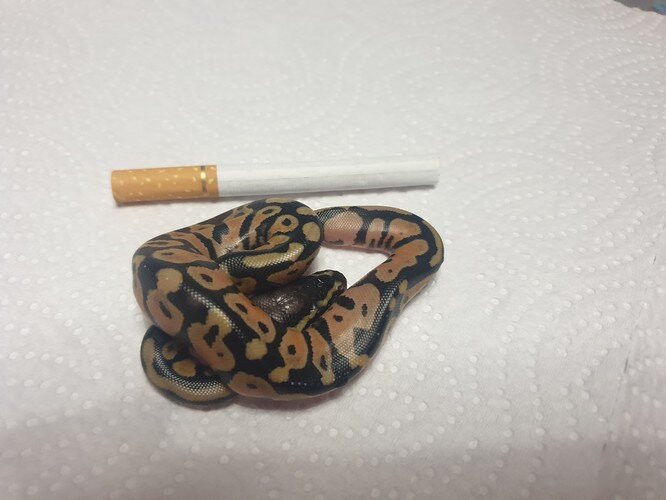 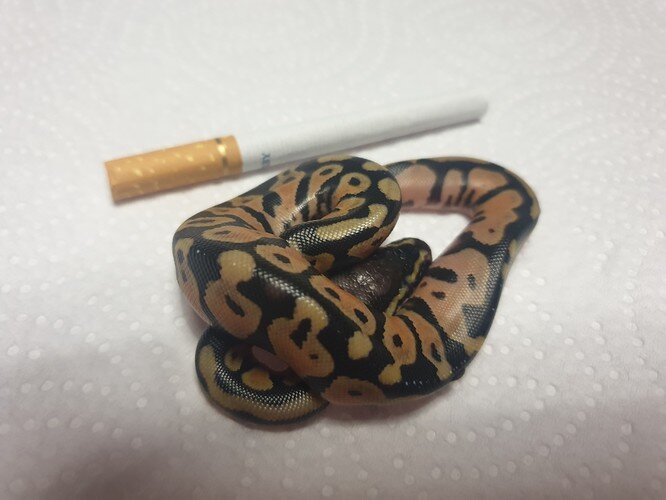 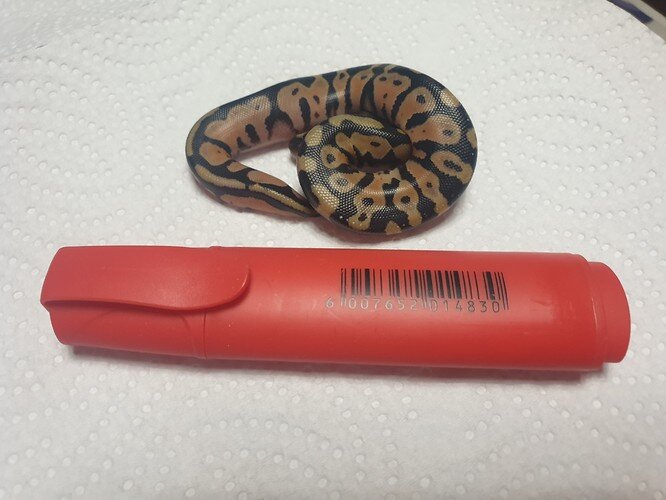 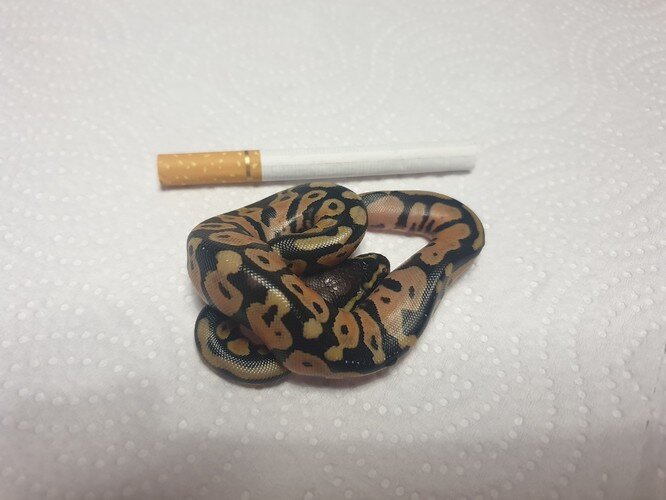 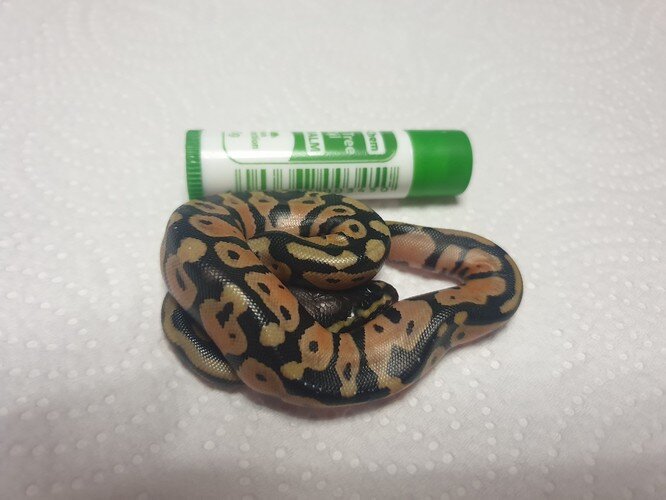 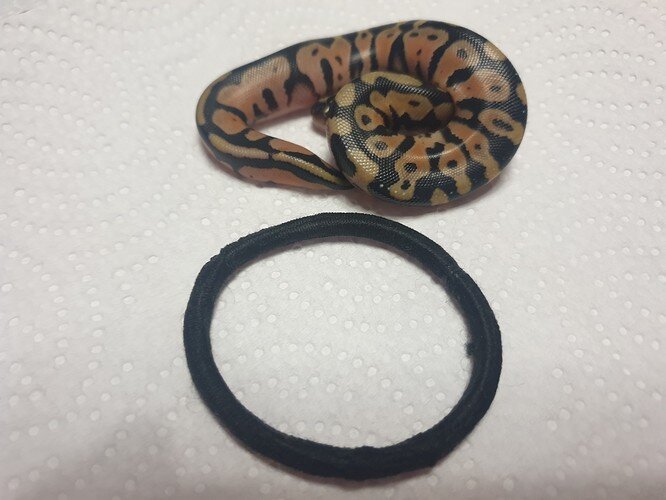 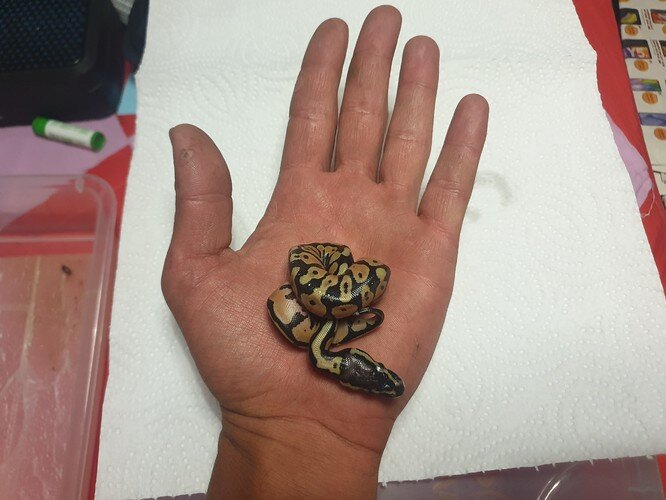 How much did it weigh I hatched a super tiny guy last year.

No Idea, I haven’t weighed it yet, I will quickly weigh it to see, give me a few minutes.

Baby weighs in at a mighty 23 grams

How is it possible that baby is alive and doing well?

Maybe it’s because it’s my first year breeding that I am just experiencing everything at once. 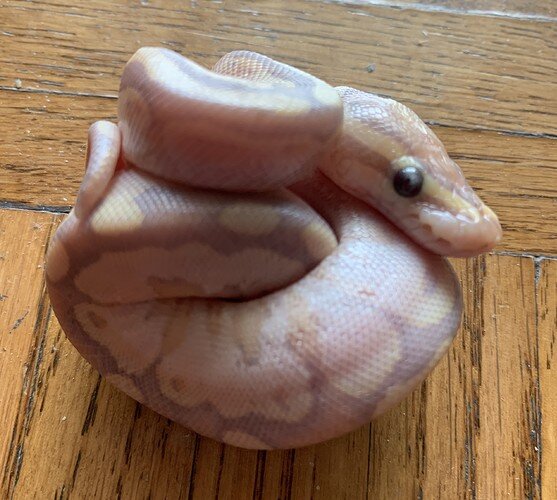 Man, I am so scared I’m gonna hurt it, it feels like I am prepping to do surgery even if I just wanna open the tub to see how it’s doing. So scared, I’m gonna leave sexing it until at least it’s first shed.

You should see, it looks lost in a hatchling tub

Is it alert and active? Did it absorb the egg sac?

That is tiny!!! Well, I guess I am experiencing everything that Ball Python breeding can throw at you.

Beautiful baby that you hatched!!!

Thank you he’s doing great now packing on the weight. 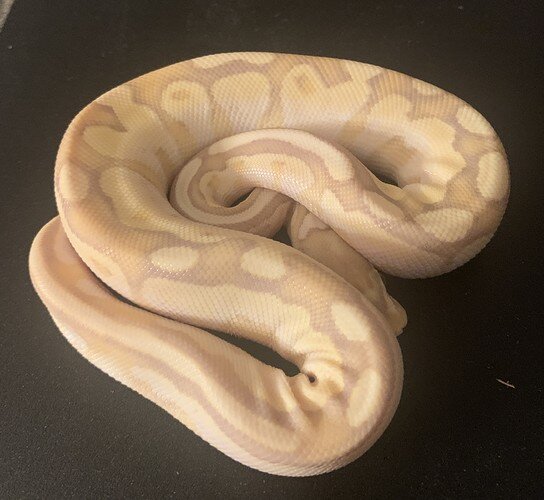 It didn’t absorb much of the egg sac, most of it was left inside the egg.
It is very alert and active, doesn’t appreciate handling at all, curls up extremely fast.
What I have noticed is that during the day it prefers the hot side of the tub and at night the cooler side right nect to the water bowl. Which is funny, as in South Africa, especially where I stay it is extremely hot, with temperatures above what Bp’s need.

And you seem to be doing an excellent job so far with your breeding!!!

Damn, that’s a big boy already. So there is hope that my little boy/girl is gonna be fine.

Thanks so much. Well 100% hatch rate out of my own home made incubator. And all babies doing well thus far, even this tiny one.

I am just lacking in one aspect, which is morph identification in hatchlings, even though I am working really hard with getting my knowledge to where I want it to be. But I second guess myself and I’m always unsure, so I always check on this forum, as I don’t wanna make a mistake and then have a client be upset or not trust me when I tell them the genes.

Totally understandable it just takes time with the morphs. I always get second and third opinions on genes I’m not super familiar with or stuff I’m not quite sure off. Your doing extremely well with the core basics!!! That’s the most important part the other stuff with fall in place with time.

Thanks man, appreciate it. All the help is appreciated, especially yours with the help of the HGW morphs that I hatched. It is of course my own fault as well, as I decided to deal with difficult to identify morphs.

Will take pics of that awesome hatchling, the Cinnamon Super Pastel Hidden Gene Woma that I hatched in my first ever clutch. To make it even better, she is also Paradox, with black spots along her sides as well as a spotty band on her back. She is just getting more awesome everyday and with every shed.

No problem at all!!! That male of yours is super super nice!!! I ended up identifying his traits correctly lol. He’s so dark it made it hard lol

Yeah man, you were spot on…I wasn’t even sure if he had Pastel in him, as he is basically coal black and to be honest I wouldn’t have guessed that the HGW would do that, and with the super white underbelly…amazing boy I have there man.
I was so lucky to get him, as I almost didn’t take him, but he came as part of a deal. But absolutely no complaints from me LOL

He would definitely have a permanent home in my collection lol. Hgw was my bread and butter for a long time. Haven’t done a lot of it the last couple seasons. But I do have a pair breeding male is soul sucker yellowbelly female is mystic potion. Been doing a lot of blackhead this season which is allelic with hgw. So down the road going to be pairing my hgw stuff with my blackhead stuff.

Amazing man!!! Yeah, I am looking for a Blackhead and Mahogany male, but both genes are quite scarce in South Africa, so the search still continues.
I am in the States so much, but doing imports to SA is a nightmare, especially with animals. Otherwise I would probably have ordered from so many breeders over there, and some of your babies would also be in sunny SA