Does anyone here have any examples of some more uncommon genes they may have in their collections? Some combo examples maybe?

A lot of those are different lines of existing genes. Cinder and mahogany for example. Only genes I work with I would consider uncommon is arroyo and sable. Sable has been around forever but kinda got forgotten about. So many old genes get new names stamped on them. But they are still the same genes. Also work with gcr axanthic and Huffman which are kinda uncommon as well.

Monsoon is a rare gene and I think someone on this form has one but I can’t recall who.

I like monsoon in its single gene form. I haven’t been impressed with the combos I’ve seen. But that’s my opinion!

I absolutely love this topic. I’ve had ball pythons 18 years now and for as long as I’ve been paying attention, there were always obscure things that made their way to the surface. Some of them became huge, some were forgotten, and some were viewed as the next big thing but never gained much traction.

I don’t have any of these genes in my collection except an adult female that is either a Genetic Banded or Joliff Tiger. There is another thread on the forum where I shared a photo of her offspring, which is a combo of her gene + Enchi, and it definitely has a different look to it.

I remember being at a local show and hearing the promoter talk about the Cinder gene and how it was going to turn the hobby upside down. He was positive that it was going to change the entire industry.

That didn’t exactly happen but it does illustrate the strange paradigm that we see where two (or three genes) are thought to be the same or at least similar but one can be acquired for a fraction of the price of the other. What if Cinder and Mahogany are indeed the same? Would you buy the Cinder for $800 when you can get a Mahogany for $200?

I have heard people say that Mahogany and Stranger have something in common based on what those genes do in clown combos. Now that is a one hell of a price discrepancy.

The obscure history of ball pythons is so amazing. Anyone else remember the Rainbow Pied or the Hyper Striper?

You are so on point! Sooooooooo many genes are the same genes just repackaged!!! I’ve been saying chocolate and Wookiee were the same gene for years. Everyone has told me I’m crazy… But it’s looking like that is true as well!

Probably won’t make any friends saying this but I think cinder, mahogany, and stranger are all the same gene.

Lace is also pretty rare. There aren’t a huge number of breeders working with it. The super is gorgeous when mixed with pastel and yellow belly.

It seems that a lot of “new” or uncommon genes are just different lines of the same ones. Though I do love looking though morph market and wobp and seeing what craziness I can find

I think cinder, mahogany, and stranger are all the same

Outback has confirmed that Cinder and Mahogany are allelic

It is possible that they are the same and not allelic. Just the same gene

The only “uncommon” gene I have would have to be Sulfur, and most people say that it’s just Fire with a different name. Personally I think that they are a bit different, but not different enough for me to say with certainty that they are different genes. I can tell you a few uncommon genes that I plan on working with though. Paint is a big one that I want to get into, Arcane seems to be interesting, I also want to get into the Grim gene, and maybe Arroyo as well. 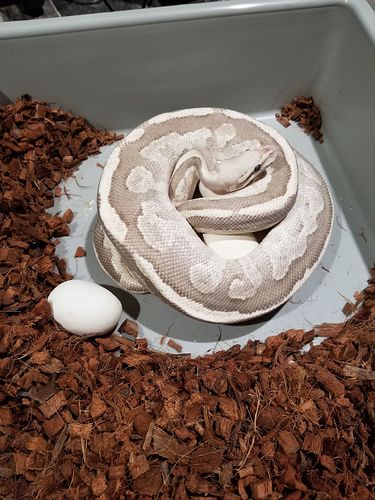 That said, Cinder was imported completely independently of Mahogany and does seem to show small differences in combos and such. So my guess is that they are probably BlkPastel/Cinny level alleles (as opposed to BlkPastel/Lori level)

Sulfur, and most people say that it’s just Fire with a different name

Sulfur and Ember, however, are the exact same thing

I could be wrong. Just my opinion no scientific evidence lol

Sulfur is different than Fire

I also have disco which is from the black eyed complex and doesn’t produce all white snakes.

I have vanilla and disco lol. Those two are definitely different genes.