Unsure if my normal male has hidden genes 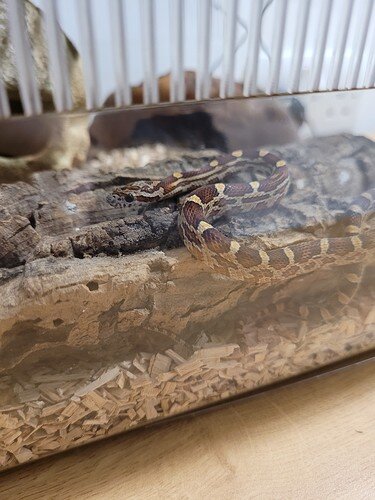 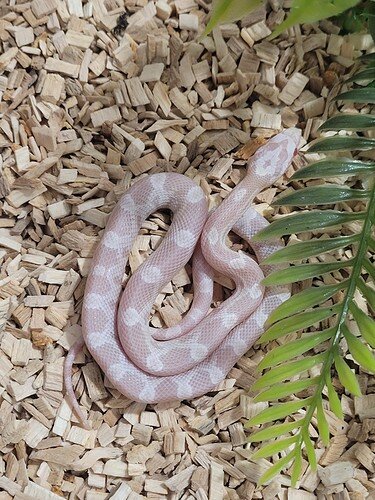 Just to add, I’m unsure as to what the parents were for each of the corns.

Because the majority of corn snake morphs are polygenetic or recessive, there is no way to tell if your normal is heterozygous for any other genes.

The second snake is a Snow which is a double homozygous combo with the Albino and Anerythristic genes.

Polygenetic mutations require ‘line’ breeding to refine. You need two snakes with the same gene sets or you’ll only get a partial expression of that trait. I don’t see that being the case here.

As far as it being Heterozygous for recessive genes, it probably is. You won’t know which genes without breeding it many times but at this stage in the hobby the majority of corns are het for something or even multi het.

There is a small likelihood that you could produce homozygous albinos or anerys or snows out of pairing those two snakes. Those are probably the most common two genes you see in corns so it’s not beyond the realm of possibility that your normal could carry them.

If your normal contains no Heterozygous recessive genes and you pair it to your snow, you will get all normals that are double heterozygous for Albino and Anery. The next year if you bred those together or back to the Snow, you would begin to see albinos, anerys, and snows.

Thanks for the info.

From what I know, the normal came in a clutch that also had anery-A and amel does this mean that my normal is het for these? Also from the pictures is there possible motley there as well? I’m really trying my best to learn how to identify morphs. The snow came in a clutch of all snows, so I thought it might be a possible hypo snow or will I only know this when it gets older as the colour changes?

Sorry for all the questions, but if I don’t ask them I’ll never learn😁

Yes, if his clutchmates were anery and amel, then he would be het for those genes (unless, in the unlikely event that there were two different fathers for that clutch). I don’t see motley. Motley will make his belly completely white, which I can’t see from the pictures, but his back pattern and side pattern don’t look motley. As far as hypo snow, it’s not possible to visually determine, since snow contains amel (eliminates melanin), you would not be able to tell if it also has hypo (reduces melanin).

So the likeliness of them producing anery babies would be higher than any other colouration then? As they both hold anery genes. I’ve tried using the morph calculator but there is no Normal het… options that I can see, so unsure of the % outcomes etc. 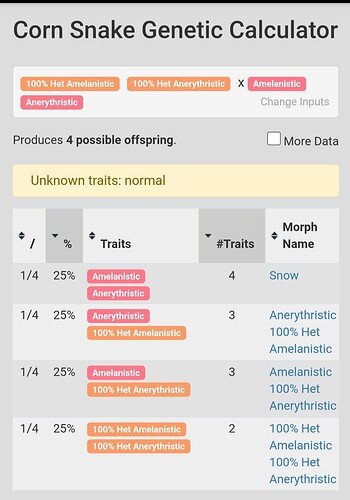 Would this be the correct calculation?

Pretty babies you’ve got. Questions are indeed how you or anyone learns. Your genetic calculations are correct IF your normal is het for amel and anery. That’s certainly possible since you say he has anery and amel siblings. It’s not absolute, as his parents could have been heterozygous for either or both of those traits. If that were the case, he’s not guaranteed het amel or anery. With the info you have, he’s a “normal possibly het (usually written p/h) anery, amel.” You can’t tell the odds of the hets without knowing parents’ genetics.

As to the hypo question with your snow, hypo is a different gene. It’s complicated by three fact that there are several genes possible at that same locus. There’s no reason to assume your snow is carrying. The fact that all sibs were snow is not related to being hypo.
Without more info on your snow, there’s

So I guess its just the case of waiting to see what they produce then. How would I know what parent a certain trait came from? Would whatever is produced mean that both the parents carry that trait or are there cases of a completely different outcome?

Sometimes waiting to see what is produced is the most exciting part! Yes, if your snakes produce babies who are anery, amel, snow or even something else, it does mean that both parents carry at least one copy of the gene fort that trait.

In the case of your snow you know she’s carrying two copies of anery, two copies of amel. She will donate one copy of amel and one of anery to each baby. Your male will donate one copy of his genes, too. You know he’s carrying at least one normal (AKA “wild type”) allele. You don’t know what the second allele is. If it’s anery, or amel, presto! You’ve got anery or amel baby! If your male has both, you may get snow babies.

This probably doesn’t help but just throwing it out there… I bred a normal Tessera and a Anery this year and ended up with 2 Amels. So there’s always the possibility of a big surprise when breeding corns with unknown hets. The goal is either to breed siblings back in with parents or breed with different gened females until you get some kind of pattern going. But corns are Muddy waters in some cases. So no real 100% guarantee unless both parents are exactly the same visual morph (even then I’d suspect you might still be in for surprises)

It will be very exciting to see what they produce! But I’ve got at least a 2 year wait before I can consider breeding them

but in the mean time it will be cool to see them grow!

I plan on testing out my same Tessera boy with a snow Tessera next year. Very exciting!! That’s the fun of breeding to me. Not the money so much as the surprises you find along the way. Not to mention sassy babies who want to take on the world.

My snow has bitten me a few times😂 very sassy indeed. Hopefully that grows out of her and becomes more sociable later in life. Also may seem silly but I feel I may be too heavy handed to be able to hold them. They say corns are hardy snakes but how hardy are they?

I hope you have a pleasant wait. I mean that - I’m not trying to be snide. Enjoy watching your babies grow and change into their mature colors. Have fun interacting with them. Enjoy getting to know their personalities, and, well, just enjoy them!

I’m like you - I can’t wait to see what some of my 2021 babies produce, whether they hatched here or I bought them. But after the initial, “Gosh, I hope they have (fill in the blank) babies!” I just try and focus on the fun of caring for them as they grow.

I’m just starting out in the herpetology field so I have much to learn and everything is new to me. Currently finishing up my degree and doing a masters. In hopes I can gain enough knowledge to work out in the field (conservation) as well as educate others via a reptile zoo/shop. So I’ve got much to look forward to in future!

Good for you!!! And good for the hobby, too.

@conorpoole1 I got 4 babies this year and I’m Flipping terrified of hurting them. Usually after one year I always feel much more confident in handling. What I do with the babies is get an oversized tub and handle them over/in that. If a baby gets out of my grasp there is much less panic as they are contained long enough for me to get them again.