I know that there are issues with Super Jungles and Super Motleys. Are there and other “Supers” I should be aware of?

If I’m right, and if not hopefully someone else can correct me, both the Sharp and Khal lines of Albino commonly lead to babies with deformation around the eyes in super form.

I didn’t think you could get supers from a recessive gene.

Your right, I literally just read this the other day… Let me hunt my BS source

“Super Jungle. Super Jungles appear to be unable to reproduce,although more are now survivng into adulthood i have seen no reliable evidence of viable litters being produced. Breeding Albino to Albino. As far as im aware this is relevant to both Kahl and Sharp strains of Albino. Not always but pairings of visual to visual albino has lead to litters of boas with deformities, particularly around the eyes. The overiding consensus among boa breeders would be to breed none related visual to a het to increase the chances of producing healthy offspring”

The aztec gene also has a non-viable super. 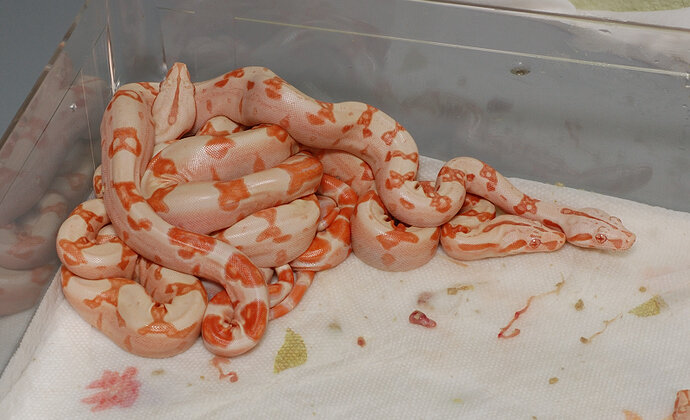 What issues arise with an Aztec Super?

Lack of coordination which may or may not improve with age, some die young, some are infertile. I think a viable litter has been produced with a super aztec male, not sure whether a female super aztec has successfully bred.

It’s my understanding, from talking with some other breeders, that the albino eye issue is less prominent nowadays that albinos are not as tightly inbred as they once were. It has been said to me that it is safe to pair albino x albino as long as the animals are not direct relatives.

I’m a major newbie and trying to get my head around morphs etc. I have seen a pos super hypo Aztec. Do they have any issues with their health?

Also how big will an adult female nicaraguan boa get

Hypo Aztecs and Super Hypo Aztecs do not have issues. However, issues may arise with Super Aztec.

Female Nicaraguan Boas, if they are pure, will usually be 5 feet or less, but there are occasional larger specimens.

Does anybody have any info on Super Raptors? My new boa stargazes occasionally, like what I would consider to be similar, but not exactly to, the spider ball python. I did as much digging as I could for any information on them before initially making the purchase, but I should’ve guessed there would be something up with them if a surprising amount of super imperators have some sort of issue

There are no issues with albino x albino pairings in the same way that supers have issues. Albino is a recessive gene known to cause eye problems in all animals that it occurs in (including humans) as proper optical nerve development and sight relies upon a normal amount of melanin. As T- animals lack melanin, these issues can occur in het x het, het x visual, and visual x visual pairings. The only reason it might show more in visual x visual is because there are more visuals produced.

Super raptors are viable, with no issues that I’m aware of. Who did you purchase from? Given the history of some of the raptors in this country I would have your animal PCR tested for arenavirus, especially if it is displaying true neurological symptoms.

I’m working with type 2 anery, and wondering if anyone has paired with vpi t+. Also considering introducing to kahl junglow, but have heard they are allelic. Any info or thoughts? Thanks in advance.

Pairing albino x albino can lead to “bug eyes” and the eyes literally fall off after a while. Making the snake blind. Some times it’s one eye, sometimes it’s both.

It has nothing (directly) to do with the general eye problems all t- animals have to deal with.

It seems to be prevalent within certain lines (probably due to inbreeding defects) and appears to be a genetic defect that is paired with the albino gene.

Within sharp this problem is almost none existing for as far as I know.

Yea there can sometimes be eye issues with the albinos in Kahl and Sharp litters. More so with Kahl than sharp. However many litters of Kahl are born perfectly fine. There’s always that chance though.