I just wanted to share a few pics of my queen Freckles. She never fails to amaze me 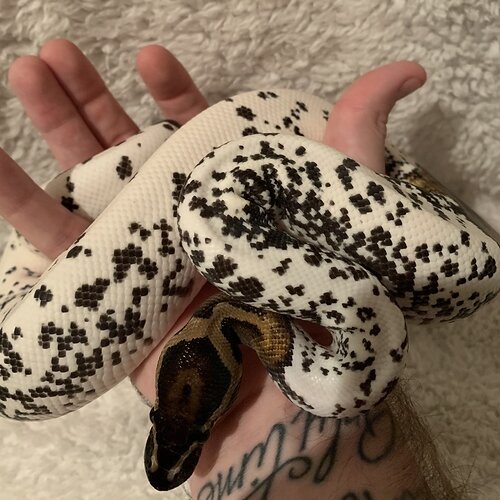 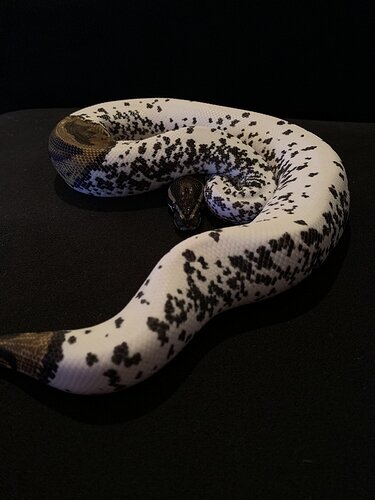 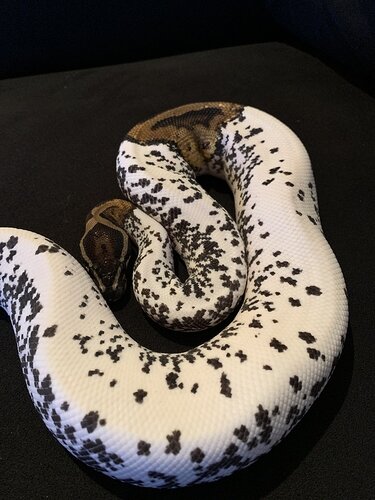 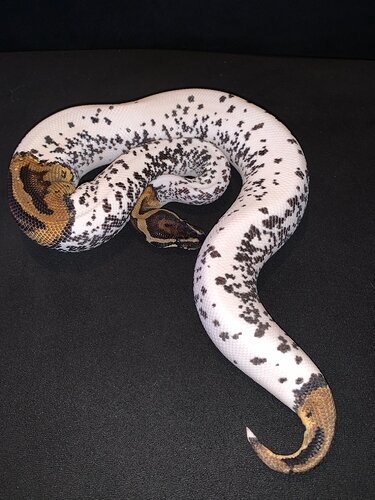 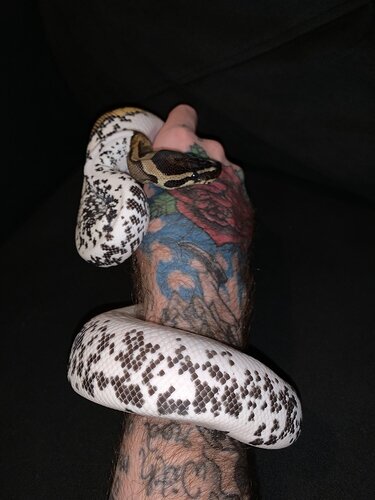 That has got to be one of the sweetest Pieds I’ve ever seen!
Has she always had that many freckles?

Thank you!! So this is how she looked a few years ago. She’s always had tiny grey specs since a hatchling. It gets crazier over time. 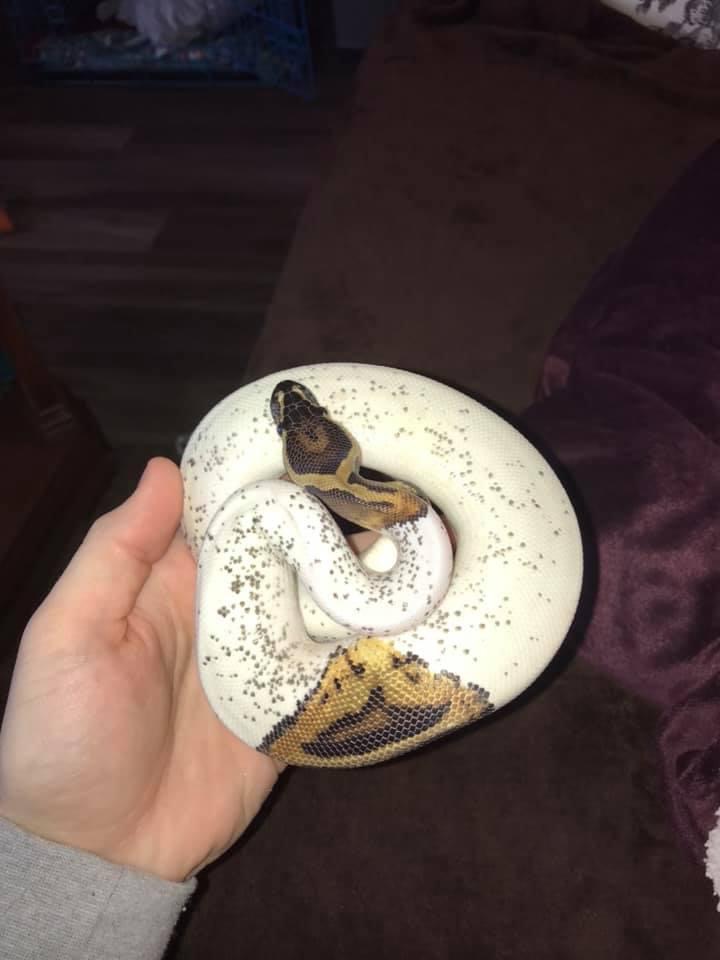 That is amazing! They got bigger as she got older, I’ve seen this happen in the Stormtrooper. Definitely Killer!

That’s pretty drastic. Really exceptional how they have darkened up like that over time.
@chesterhf, is there a genetic explanation to this occurrence? Or just a unique paradox event?

I’ve seen pictures of this snake on reddit and around the internet before and honestly I don’t have a clue! She’s so gorgeous and striking, I would kill to know how to reproduce that pattern.

I’m wondering if it’s a mutation that is similar to the one that produces the spotted pattern in Dalmation dogs, as they are born pure white and develop the spots which grow and darken over time?

Update: Apparently the spotting found in the Dalmatian is an interaction between multiple loci known as Piebald, Flecking, and Ticking. So we know this ball python already has piebald, so presumably a second (and possibly) third mutation would lead to the “freckles”.

Interesting.
I’m a pretty big dog guy and I didn’t know that about Dalmations.
If that could be recreated, that would be amazing. One of the reasons I’m not a big Banana fan is due to the freckles that develop over time.
But in a Pied like this, it’s completely gorgeous.

@swflreptiles Do you intend to breed her in the future to try and see if her offspring happen to inherit the same freckle look?

Yes I do! She just hit 1000 grams so she’s not too far away. Searching for a high white male to breed with her. I think that would be my best bet to see if the freckling can be proved out

Glad to see her posted here. We spoke on FB a week or two back. Welcome! You’ll get some great professional input here (not from me…). Im excited to see what comes of this girl and her future offspring.

searching for a high white male to breed with her.

Excellent!! I was going to suggest that you pair her with another piebald for your highest chances of proving out the freckles. I can’t wait to see what comes out of that cross

Isnt the black dots in the white of a pied a form of paradoxing? And the morphs that cause high white animals wouldn’t these decrease the probability of replicating the dots? And if I’m not mistaken the cow mutation in retics start out all white and develop spots as they age. And in banana/ coral glow genes like mojave, black pastel, lesser and others decrease the amount of spots that develop.

Just saw her on Reddit the other day!! Truly a remarkable noodle!!! So pretty

She was solid white as a baby, the grey specs developed over the first few weeks. Now they’re all black. They’re not slowing down any either. She gets a new spot everyday it seems like. But I’m not sure if paradox or not. We shall see soon enough though.

I love speckled Pieds like that. The speckles continue to develop on most Pieds throughout their lives, some are just more extreme. As far as I’ve seen it is not genetic but I would still put in the effort to attempt it.

And the morphs that cause high white animals wouldn’t these decrease the probability of replicating the dots?

I don’t know about this, which is why I was suggesting a single gene pied male to cross with, not a combo. My gut feeling is that it isn’t paradoxing because of how the spots appear and develop over tim, but of course I very likely could be wrong.

And if I’m not mistaken the cow mutation in retics start out all white and develop spots as they age.

I’m not familiar with retics at all, but I looked up it up and it appears that the cow phenotype is caused by an interaction of two loci (Phantom and het for orange ghost stripe), neither of which has the speckling on its own. To me that supports the “Dalmatian hypothesis” that it’s genetic.

Once again, still could be very wrong here

This is probably the most pretty and interesting ball python I’ve ever seen, what kind of morph is this?

@chesterhf And you could definitely be right geneticist I am not lol. I agree I would use a single gene male as well. Eliminate all other variables. And I was just listing examples of speckling for comparison sake. I have had several people tell me before speckling in pieds was a form of paradox. Never made sense to me though.

As for morphs that cause high white in Pieds, I have seen some with no speckling and some with more than average. One of my Suma Pieds is becoming quite spotted but in my experience the highly speckled are a one-off. 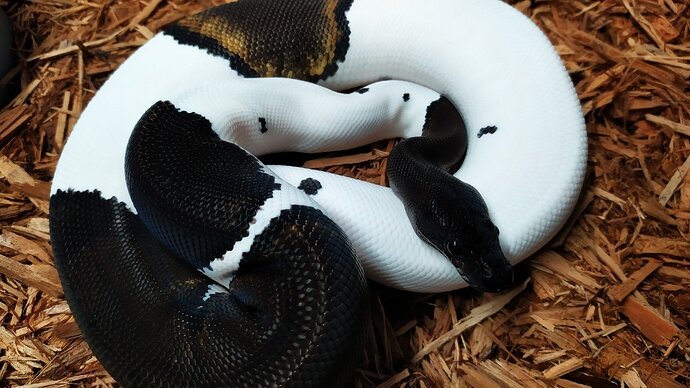 And if I’m not mistaken the cow mutation in retics start out all white and develop spots as they age.

That’s correct. Most start out all white unless Goldenchild is also in the cow. That can produce a hatchling with some faint yellow on the dorsal and sides of the snake. But some regular cows( Phantom het Orange Ghost Stripe) can also develop faint yellows that usually fade with age, and being a relatively new combo in retics, we’re still learning as to why this happens.
But all cows will develop the spots as they grow, but like @chesterhf mentioned, neither Phantom or HOGS have the spots on their own so it’s a combination of the 2 genes that make the freckles appear.