Creating my own Dubia colony

Thought I’d go ahead and share my adventures thus far in my noble quest for a productive but small dubia roach colony. Please note that this is all from the perspective of someone who hasn’t tried this before, and additional resources should be consulted as well if you plan to make your own colony. For me, the colony serves as a back-up plan if i can’t get a hold of the feeders I prefer, as well as a bit of an adult science experiment.

First thing, of course, was the research. I watched several youtube videos, read through a few sites, and learned a few things:

So, armed with that info, I started designing my colony. Though roaches hate light, I decided that I’d house mine in a clear tub because I’m super curious and I just couldn’t help myself! Then I punched out some ‘windows’ at the top, so there would be some air exchange, but no risk of escapees. In order to prevent any other insects entering, I hot-glued some pieces of pantyhose, as it was what I had. I think most people use fine mesh. (The windows are extremely irregular because of a medical condition in my hands- I’m sure it would be easy enough to make better rectangles with a better set of hands.) 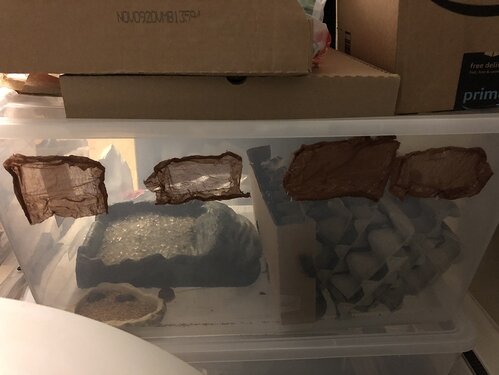 I kept hermit crabs for years, so I already had the perfect things to hold the water supply (crystals of course, to minimize insect drowning) and the chow/food. I ordered some egg crate, and was sure I was all set- until I put the egg crate in the tub and it promptly fell over into the water crystals. 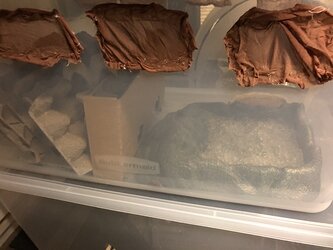 JVv0OzfzQ7Oa3%H7FW2I1g4032×3024 1.86 MB
I started wandering around my apartment, hoping that a solution would present itself… and it did! I cut to size the cardboard that crates of Diet Coke come in from Costco! I cut some holes in the bottom, so the roaches would have portals to go eat/drink. I found it also helped shield the egg crate from some of the nearby lighting, which was a side benefit.

Another thing that I did, but that may not be of importance for others, was buy an identical second tub. That way, when the time comes to clean the colony (if egg crate is still not super-soiled), I can simply lift the eggcrate and set it in the new tub, as opposed to having to find a place to stash all the roaches while I clean the single container. It additionally serves as a stand that helps lift the colony up so I can see it better and perform maintenance more easily.

Now, full disclosure- my colony has not started producing; I don’t think I have any fertile females yet. Most people either buy colonies that others have assembled & had running for some time, or buy some adults (you only need a few males, concentrate on young, adult females) to kick start things.

Along other lines- if you have larger reptiles, they are an ideal way to dispose of your excess adult males. Many people sell them on ebay as well.

When things get going and are really boppin’, one way to sort the nymphs from the adults is using sifting pans. The same kind you use when panning for gold. 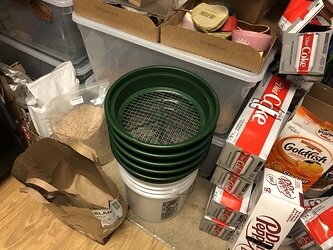 sxqxKgAPRM6q1%ooqdbCtA4032×3024 2.5 MB
These are also useful if you plan to have a mealworm colony. (If anyone needs a tutorial on making a mealworm colony, I can go over that as well, with the understanding that I do not recommend mealworms as a staple for most animals.)

So I hope that was useful or interesting. Thanks for reading!

7 Likes
What has been your favourite topics of the year?
Leopard gecko diet
Where do you bulk buy your feeders?
eaglereptiles October 7, 2020, 6:45am #2

I don’t even need Dubai roaches, but now I want to attempt this

I sure a lot of people will make use of this

This is so much great information that I feel a lot of people can’t find. Plus it was a good read…well thought out.

Great info. I have been raising my own dubias for over a year now. They are an easy way to make extra money. I sell my extras to the local pet stores. Cost me about $100 to start and they have paided off. I put Buffalo Beatles in my colony to keep them clean. 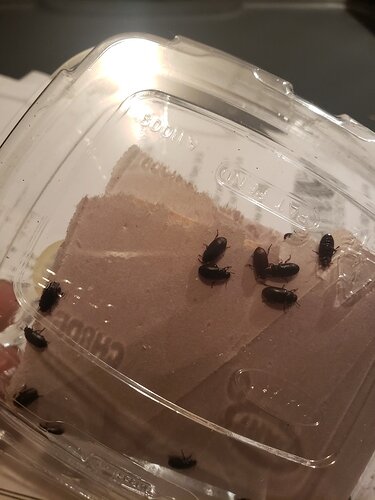 It is possible to become allergic to their frass (poo), so efforts should be made to reduce exposure or wear protective equipment.

I will caveat this from “possible” to “guaranteed” you will become allergic. And if you enjoy shrimp/crab/lobster/crayfish then be forewarned that the allergy to the roaches will translate to an allergy to these as well and you will no longer be able to eat them

That’s useful to know, I already have schell fish allergies. I mask up already but will be even more cautious.

Man I have been raising these things over a year now. I can’t live with out shell fish. Thank you so much for the info. I did a lot of research befor hand but did not hear of anything like that. So it might not be the cortalus making my eyes itch when I clean my snake room. I clean my roaches out at the same time.

There are other roach species you can raise that do not seem to cause people to develop allergies. I got rid of my dubia because I got to the point where, even with a mask and gloves, I was having massive anaphylaxis leading to 4-6 hour long asthma attacks. However, I kept my spec. Ivory colony and have never had an issue with them. I also have two different species of Gyna (though they are cohab cleaner crew in my large python enclosures, not feeder colonies) and have never had an issue when dealing with them.

So it might not be the cortalus making my eyes itch when I clean my snake room. I clean my roaches out at the same time

I love my roach colony, so do my tegu,bearded dragon, Ackies monitor, African Bull frog, and toads.
I keep my colony predictive by purchasing 100 nymphs from expos or when ordering other feeders to add to my colony.

I’m most likely allergic to canebrakes. So far its only been canebrakes not timbers. Going to try and trade my roach colony today, my nile and asian water monitors are mature enough now. I don’t plan on more baby monitors, I had my fill with these two. I love them but they where a hand full.

Would it be possible to prevent the allergies any way, like having the roaches in a bioactive setup with springtails or isopods and maybe at the same time make it possible that you don’t need to clean the enclosure.

I used dermestids and buffalo beetles to help keep my colonies clean and that did not help.

To go bioactive with isos and springs would probably take a significantly larger enclosure though. Would also make it a serious pain to get smaller roaches for feeding since the nymphs would bury down in the substrate.

About how big of an enclosure would it need?

No clue… My colony was in one of those 80qt RubberMade totes… To get a properly balanced bioactive setup that would be able to handle a colony dense enough for weekly feeding I would say you would need at least twice that size, maybe more

Something else to consider. How are you going to find the roaches in a bioactive enclosure.

Not an exact comparison but I have Gyna lurida and G. centurio as part of the cleanup crew in my blackhead and bredli enclosures, respectively. Those cages have a 244cm x 76cm footprint and my media in them is probably 10-15cm deep.

I put them in there six or so months ago, I have seen a single centurio and maybe a dozen lurida since then… Roaches really like hiding when given the chance LOL

I think the only way to do it would probably be to turn up the soil and catch all of the roaches as possible. Even then that probably wouldn’t be a very efficient way to do it. I might try it just to see if it works when I get my bioactive elements cultures going (pothos, springtails, a few species of isopods) so there isn’t really a loss if it doesn’t work.

If you’re hoping for success in terms of food production, it might be easier to just wear gloves and a mask when handling a more typical colony. But if you’re more interested in setting up more of a science experiment, kinda like me, you should totally give updates on how it goes!

Thus far my dubia colony is doing great- growing roaches, not tough to maintain… well, except for one problem. I ordered a handful of adult, fertile females, only to realize that I don’t have any mature males, either.

So, since I am impatient, I ordered some dudes, and the gentlemen shall be arriving this week. I can’t wait to hear the pitter-pat of little, baby nymph feet!

it might be easier to just wear gloves and a mask when handling a more typical colony.

I wanted to give one final update: my Dubia colony has gone on to be a huge success! I don’t produce enough to feed my entire collection from it (yet), but that wasn’t really ever my goal. Dubia are just part of the diet I feed my guys. From my experience, it does seem that the potential to save money could be significant for some herpers.

In fact, I’m anticipating that my colony’s production will eventually significantly exceed my need, and that I’ll have to figure out what I feel is the most ethical way to deal with a surplus. My health issues are significant enough that having anyone come by my place to purchase or pick up wouldn’t be worth the risk in my area.

Also wanted to mention one more time that, as discussed above, if you decide to work with Dubia, you should wear protective gear and monitor closely for the development of allergies.